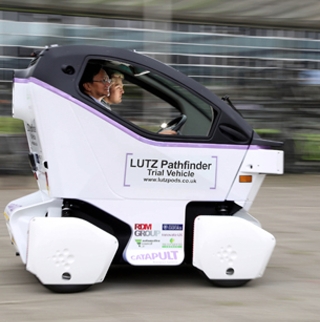 The electric-powered LUTZ Pathfinder pod was presented to commuters and other members of the public outside Milton Keynes Central train station, with members of the Transport Systems Catapult project team on hand to answer questions.

Following the installation work, the pod will undergo a series of calibration tests at a private test track before returning to Milton Keynes for the start of the public trials. At that stage, the pods will be the first fully automated vehicles to be trialled on public pedestrianised areas in the UK.

“This is a very exciting day for everybody involved in the LUTZ Pathfinder project, because it signals the completion of the manufacturing phase and the effective start of the autonomous technology trial,” said Transport Systems Catapult CEO Steve Yianni.

“When you consider that there wasn’t even a design in place for this vehicle less than 18 months ago, it has been a really quick turnaround to now have our first research vehicle ready to start work, and this has only been possible as a result of our successful collaboration with RDM, MRG and Milton Keynes Council.”

The pods will be driven initially in manual mode – allowing them to map and ‘learn’ their environment. They will then begin to operate in autonomous mode, but with a trained operator still remaining in each pod, ready to take back control of the vehicle if necessary. The pods will have a maximum capable speed of 15mph but will be limited electronically depending upon the environment they are travelling in (for example, moving more slowly in congested areas).

Findings from the LUTZ Pathfinder project will also be used to support the larger-scale UK Autodrive programme which is set to trial a fleet of 40 self-driving pods, as well as “regular” road-based cars, in Milton Keynes and Coventry.

Previous: New hydrogen filling station opens near Sheffield
Next: Carmakers urged to extend US commitment on AEB to Europe