The Government is to legalise the use of semi-autonomous driving technology for the UK’s roads this year, but experts are warning there is still a lot of work that needs to be done. 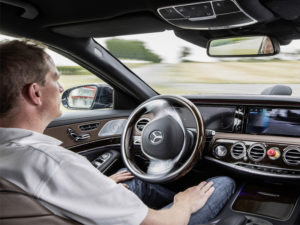 ALKS enables a vehicle to drive itself in a single lane, while maintaining the ability to easily and safely return control to the driver when required

Following a consultation last year, the Department for Transport has today confirmed it’s planning to allow vehicles with Automated Lane Keeping Systems (ALKS) technology to be used from later this year at speeds of up to 37mph on motorways, basically providing assistance in traffic jams.

It means drivers with cars already featuring such systems will be able to use them legally, handing control over to the vehicle, which will constantly monitor speed and keep a safe distance from other cars. But – and this is a major but – while it’s being dubbed “self-driving”, the technology does not provide fully automated driving and the driver will need to be ready to take over at all times.

The Government has said that the technology could improve road safety by reducing human error, which contributes to over 85% of accidents. It’s opened a new consultation, proposing amendments to The Highway Code to introduce a new section regarding rules for the safe use of automated vehicles on motorways. Laws are expected later this year.

Transport Minister Rachel Maclean said: “This is a major step for the safe use of self-driving vehicles in the UK, making future journeys greener, easier and more reliable while also helping the nation to build back better.

“But we must ensure that this exciting new tech is deployed safely, which is why we are consulting on what the rules to enable this should look like. In doing so, we can improve transport for all, securing the UK’s place as a global science superpower.”

The news has been welcomed by the Society of Motor Manufacturers and Traders (SMMT), which represents the UK’s automotive sector. Chief executive Mike Hawes said the move will put Britain in the vanguard of road safety and automotive technology.

He added: “Automated driving systems could prevent 47,000 serious accidents and save 3,900 lives over the next decade through their ability to reduce the single largest cause of road accidents – human error.

“Technologies such as Automated Lane Keeping Systems will pave the way for higher levels of automation in future – and these advances will unleash Britain’s potential to be a world leader in the development and use of these technologies, creating essential jobs while ensuring our roads remain among the safest on the planet.”

But the technology also reopens conversations about the need to differentiate between fully and semi-autonomous driving systems and to ensure driver are properly educated on their use – something that has been in the news again lately after a recent crash involving a Tesla.

Edmund King, AA president, said: “Automated Lane Keeping systems should be classified as ‘Assisted Driving’ technology and is a world away from ‘self-driving’.

“Without doubt, vehicle safety technology can save lives, but we shouldn’t be in race to take drivers’ hands off the wheel.

“There are still gaps in how this technology detects and stops if the vehicle is involved in a collision. There are still question marks over how drivers will be fully informed how these systems work. More needs to be done to rigorously test these systems before they are used on UK roads.”

Matthew Avery, director of research at Thatcham Research, said: “Automated Lane Keeping Systems as currently proposed by the Government are not automated. They are assisted driving systems as they rely on the driver to take back control.

“Aside from the lack of technical capabilities, by calling ALKS automated our concern also is that the UK Government is contributing to the confusion and frequent misuse of assisted driving systems that have unfortunately already led to many tragic deaths.

“A widespread and effective ongoing communications campaign led by the automotive industry and supported by insurers and safety organisations is essential if we are going to address current and future misconceptions and misuse.”

Thatcham has also previously warned that lives could be put at risk in certain scenarios.

Its research has identified a number of scenarios in which it says ALKS-equipped cars in hands-free mode will not react safely as they cannot respond in the same way as drivers; for example, if there are pedestrians on the motorway or closed lanes. It says the technology will not recognise either and so won’t take action. In any case, a car with ALKS technology and in hands-free mode won’t be able to change lane autonomously as it’s not allowed.

RED Driver Risk Management said it was particularly concerned about the proposed line for the Highway Code in the Department for Transport consultation on Automatic Lane Keeping Systems which stated, “While an automated vehicle is driving itself, you are not responsible for how it drives, and you do not need to pay attention to the road.

CEO Ian McIntosh said: “Autonomous driving technology can help make vehicles safer, but to suggest that the driver is not ultimately responsible for the operation of a car or van is utterly wrong – and potentially dangerous. The driver must always be fully accountable, and the fact that even at the consultation stage removing this basic concept has been mooted, suggests the Government has got too far ahead of itself, the technology and the fleet industry on this.

“It sends the wrong message to drivers, sows confusion about what technology can do, and demonstrates a lack of understanding of the fleet sector’s needs in terms of risk management and duty of care.

“There are already so many unanswered questions about how autonomous vehicles will operate in the real world, such as who is liable in the event of an accident, and so at this early stage to be thinking of taking the driver out of the equation makes the issue even more challenging. Who is going to be held responsible and accountable if the person behind the wheel isn’t?”

And Autoglass, a specialist in Advanced Driver Assistance Systems (ADAS) recalibration, has also warned that the maintenance and upkeep of ADAS tech must be addressed by the Government.

Neil Atherton, sales and marketing director, Autoglass, said: “As we move up the levels of automation, it is crucial that the Government supports this with necessary legislation to ensure that recalibrations are performed as required and by appropriately skilled technicians using approved tools and equipment. Where safety is concerned, it is vital that the whole industry is held to the same high standard, so this technology is allowed to reach its full potential.”