Renault has unveiled its second-generation Captur small SUV, which introduces new driver assistance features plus a plug-in hybrid from 2020. 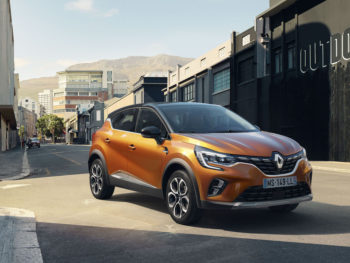 Marked out as the second model to be built on the new CMF-B platform, following on from the new Clio, the latest Captur is larger, lighter and stronger than its predecessor with more interior and boot space while retaining the sliding rear bench for enhanced versatility.

It also emulates the Clio in bringing an evolutionary approach to exterior design with a more “revolutionary” approach to the interior. This is built around the ‘Smart Cockpit’ concept, which features the optional 9.3-inch infotainment screen, said to be the biggest in the class.

The Captur also launches a plug-in hybrid from 2020 as Renault looks to differentiate itself in the marketplace. This will take the E-Tech hybrid tech debuted in the Clio including a four-cylinder 1.6-litre petrol engine and two electric motors and marry them up with a mains charger and larger-capacity 9.8kWh battery – a set-up also being used in the forthcoming Mégane.

The system is similar to the Clio E-Tech one, meaning it features regenerative braking system that enables a one-pedal driving technique, further boosting efficiency. Charging is taken care of with a Mode 2-compatible charging plug for domestic sockets and a Mode 3 plug for charging stations.

At the top of the petrol range is the 155hp version of the 1.3 TCe engine, exclusively available with the EDC seven-speed automatic dual-clutch gearbox and fitted with a Multi-Sense Sport mode. It replaces the previous 150hp unit and brings lower consumption and CO2 emissions.

Diesels comprise 85hp and 115hp 1.5-litre Blue dCi models; the former with a six-speed manual gearbox while the latter is offered with the EDC seven-speed dual-clutch automatic transmission with steering wheel gearshift paddles.

As with the PHEV, fuel and CO2 figures have not been announced.

Aided by its new platform, the new Captur also brings latest infotainment system and advanced driver assistance technologies. New features include the option of a 360-degree camera and active emergency braking with cyclist and pedestrian detection, both firsts in the Renault range, and the Highway & Traffic Jam Companion, which combines adaptive cruise control (with Stop & Go) and lane keep assist and is active from 0-100mph.

Platforms and apps include Easy Connect and MY Renault, plus the Easy Link multimedia system, which is available in three versions, all compatible with Android Auto and Apple CarPlay.

Full specification details along with fuel and CO2 data are due before the car’s launch at the start of 2020.