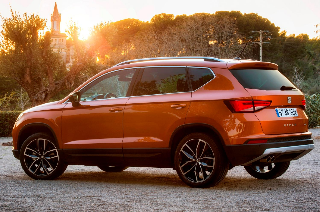 The new car, which SEAT believes will reinforce its fleet appeal as well as making a real impact in the UK’s fast-growing compact SUV fleet sector, is available to order from May 3 and has its showroom launch in September. On the road pricing starts at £17,990 and rises to £29,990 for top of the range models.

Three trim levels will be offered in the UK: S, SE – expected to be the best-selling trim – and XCELLENCE. In addition, a ‘First Edition’ version will be offered, with more details to be announced later this spring.

Engine line-up covers two petrol and three diesel powertrains, spanning 113bhp to 187bhp with a choice of either six-speed manual or seven-speed DSG-auto transmissions. Providing four-wheel-drive capability, SEAT’s 4Drive powertrain is available on both 2.0 TDI diesel engines. Emissions and MPG figures are expected to be among the best in class when they are confirmed.

From launch, there will be 113bhp three-cylinder 1.0 TSI and 1.6 TDI engines available on S and SE models, while a 148bhp 1.4 EcoTSI and 2.0 TDI will be available across SE and XCELLENCE trims. Finally the 187bhp 2.0 TDI will be exclusively available on the range-topping XCELLENCE, and comes with DSG and 4Drive.

Connectivity was also a focal point in the development of the Ateca. Full Link ensures full connectivity with all modern smartphones, while an eight-inch Media System Plus screen is available along with other connected innovations including wireless smartphone charging and gesture control.

Peter McDonald, head of fleet and business sales for SEAT UK, said: “We expect high take-up from fleet buyers for our new Ateca SUV due to the new model’s keen pricing and outstanding style, quality and practicality. We’re already seeing orders flooding in for the Ateca in several of SEAT’s key European markets and we believe UK fleets will respond similarly.”

Between them they will be providing a dazzling array of new models for test driving, with some available for the first time anywhere in the UK, on three circuits of the world-famous Silverstone Grand Prix venue – the National, International and Stowe circuits – plus a road route in the locality.

Show director, Jerry Ramsdale, said: “We are delighted that SEAT UK has chosen this year’s Fleet Show at Silverstone to showcase its exciting new Ateca SUV, which looks set to have great appeal in a rapidly growing sector.

“Its presence further increases the reasons for fleet decision-makers to take a day out of their busy schedules and attend the event. By coming to this year’s Show, visitors will have the chance to get up close and personal with some of the very latest models to hit the UK fleet market,” he added.

As always, the Fleet Show looks to strike a balance between interactive fleet education, test driving and a contemporary fleet exhibition which features some of the latest developments, products and services in the fleet arena.

On the education front, a new, Question Time-style interactive session will be led by industry experts and will tackle some of the leading fleet topics of the day, as well as addressing concerns from the floor.

The Silverstone Wing will again play host to a wide-ranging fleet exhibition in halls 1-3, boasting a diverse array of suppliers who will be demonstrating the latest developments, products and services in the fleet market.

There will also be plenty of opportunity for Show visitors to hold face-to-face meetings and network with exhibitors and other visitors alike.

This year, the audience will be audited by the Audit Bureau of Circulation (ABC) for the first time to give a clear and auditable record of the number of fleet decision-makers attending the event.

Registration for this year’s event is now open and details of how to register can be found here: http://thefleetshow.co.uk/visitors.