SEAT is giving UK fleet and business customers to chance to live with its new Ateca SUV for four days. 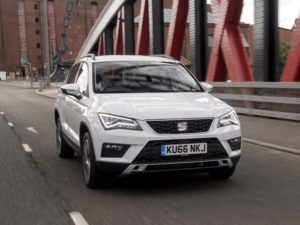 The test drives are available via the carmaker’s UK network of Business Centre dealerships until the end of the year, and enable fleet operators and drivers to see how well the Ateca could slot into their businesses, as well as their daily lives.

Peter McDonald, head of fleet & business sales at SEAT UK, said: “A test drive is one of the most important stages of choosing a new car; it’s a time for decision-makers to consider whether a new vehicle will help them achieve business objectives and project the image they really want. So, we wanted to give them the chance to really get to know the Ateca and all of the benefits it delivers.

“The Ateca is already being recognised as the new car to beat in the SUV sector, having just collected its first award from Auto Express, so we’re confident that after spending close to 100 hours with one, those who take us up on this opportunity will probably be pretty reluctant in giving us back the keys.”

Bookings for the four-day test drives are being taken from now until 31 December, via the online booking system, http://www.seat.co.uk/fleet/business/ateca-4-day-test-drive.html, or, by calling 0800 464 0405.