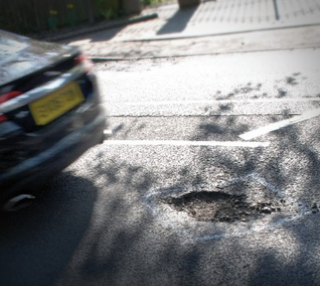 Under the changes for its budget for 2016/17, the local authority has said that potholes will now need to be at least 60mm deep before it will fill them compared to 40mm before.

The move has caused concern amongst local residents. Willie Roberston, a Liberal Democrat councillor, said: “As a cyclist I know that damaged road drains are a real danger. Often you can't avoid them because of traffic passing you.

“I am also aware of a few people locally who have damaged their cars on potholes recently. I wonder what the cost will ultimately be when people claim for compensation from the council for the cost of repairing their vehicles.”

The RAC also said that its data showed that the state of roads in Scotland is getting worse.

Spokesman Rod Dennis said: “Analysis of RAC breakdown data shows that Scotland saw the third greatest year-on-year rise in the number of call-outs to vehicles likely to have suffered damaged due to poor road surfaces. In 2015 RAC patrols went to the aid of 2,537 motorists in Scotland who had experienced broken shock absorbers, ruined suspension parts and distorted or damaged wheels – 27% more than they did the year before.

“It is a reality that councils are having to make some difficult decisions on where to cut spending. And despite the state of local roads being a priority for many motorists, spending on local road maintenance isn’t ring-fenced, so there will always be a temptation to cut this particular line of the budget sheet.”

However he added that only committing to only fixing larger potholes is a false economy, explaining: “The larger a pothole becomes, the greater risk it represents to road users and the more costly it becomes to repair. While in the short term the council might save money by repairing only larger potholes, it is saving up an expensive problem for further down the line.”