Plans to implement low emission zones across Scotland’s four major cities have been put on hold due to the Covid-19 outbreak. 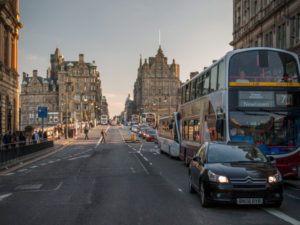 The schemes were due to be implemented in Edinburgh, Aberdeen and Dundee later this year alongside the existing scheme in Glasgow but Transport Secretary Michael Matheson said the Scottish Government had come to the view that “introducing low emission zones across our four biggest cities by the end of 2020 is no longer practicable”.

Instead, the Low Emission Zone Leadership Group, which includes Matheson as well as Climate Change Secretary Roseanna Cunningham and representatives from the four local authorities, Public Health Scotland & SEPA, said the pause would provide an opportunity to re-evaluate the kind of transport systems we want to see return to our cities after Covid-19.

Matheson said: “We remain dedicated to introducing Low Emission Zones across Scotland’s four biggest cities to improve air quality and protect public health. Local authorities share this ambition and Scotland’s first LEZ in Glasgow has been in place since 2018. LEZ planning within local authorities will continue, the development of regulations is ongoing and funding to support businesses and individuals prepare for LEZs remains unchanged.

“Given the recent uptake in active travel and air quality levels we are going to take the opportunity to review how Low Emission Zones can be designed and how our cities might witness a green recovery transformation in tandem with the Covid-19 recovery plans. We must be bold in our actions to reset the system to meet our climate change ambitions, reduce inequalities, improve our health and wellbeing and deliver sustainable economic growth.”

Already, London’s Ultra Low Emission Zone, which went live in April 2019, has been suspended due to the outbreak.

Clean Air Zones were also meant to launch in England this year but the arrival of the first zones in Leeds, Birmingham and Bath has already been pushed back to 2021, as the councils express concerns over the impact of the schemes on both individuals and businesses.

Meanwhile Coventry has extended the consultation on its clean air plans and Greater Manchester’s consultation has been put on hold due to the pandemic, again to enable more in-depth evaluation of plans.

However, the delays have been slammed by environmental groups. Commenting on the announcement by the Scottish Government, Friends of the Earth Scotland’s air pollution campaigner Gavin Thomson commented: “The short-term drops in pollution we’ve seen during shutdown will not be sustained unless councils and government take meaningful action to change our transport system, restricting the most polluting vehicles while prioritising walking and cycling.

“The Government should limit the extent of any delay, and use any pause to make sure the zones are genuinely ambitious and change our transport system.”

ClientEarth has also said that Clean Air Zones should go ahead as soon as possible. Katherine Nield, lawyer, UK clean air, said: “ClientEarth has always believed that the UK Government should be introducing CAZs only alongside help and support for people and businesses across the country to move to cleaner forms of transport as quickly as possible. This remains just as crucial now and should be part of the package of stimulus measures to help drive our economic recovery.”

Previous: Today in Fleet – Thursday 7 May
Next: Comment: How to leverage driver data to meet efficiency & sustainability goals