Drivers in Europe can now use a new service to digitally check tyre pressures on scanner ramps at car parks. 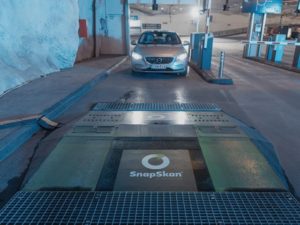 Developed by Nokian Tyres in cooperation with the tyre retail and car service chain Vianor, the free-of-charge SnapSkan service is now available in five places in the Nordics.

The drive-over scanner ramps measure the tread depth of the car’s tyres and send the results directly to the driver’s smart device – drivers just need to opt in by text or online, either before or after the scanning to get the digital report.

The report includes the measurements of tyre treads and a code that offers a discount on new tyres in selected stores.

SnapSkan can measure the tyres on any passenger car and it works with all tyre brands.

“Caring and safety are at the core of everything we do. SnapSkan is a unique consumer service and it sets us apart from other tyre manufacturers. SnapSkan allows us to communicate to the drivers not only the condition of their tyres, but also what effects their condition has on road safety in general,” said Hille Korhonen, president & CEO for Nokian Tyres.