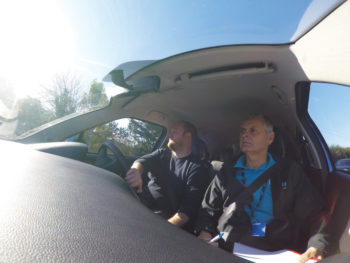 Observation is is the single most important aspect of driving

Everyone wants to save money and everyone wants to save time. However, we tend not to want these to be at the expense of the way we’ve become accustomed. For instance, new cars offering fuel savings over their predecessor are, in all likelihood, only going to save pence if anything. Engines may be more efficient, but the outlay is considerable, and the car may be heavier, which can offset engine efficiency. Downsizing is one option; driving around in a smaller and therefore lighter car is likely to reduce fuel bills, unless you’re opting for something lower than one-metre tall and with racing stripes.

Fleets can reach the holy grail of driving the cars they want while still saving time and money, however, by simply adopting eco safe driving techniques.

Taking a few hours out of our day to spend with Richard Gladman, one of IAM RoadSmart’s many driving instructors, the aim is for my colleague and I to drive a car as we normally would, while Richard observes our driving technique and style. Following feedback, the plan is to drive the same route a second time, only this time around applying any new techniques learnt.

Richard’s background as an advanced and highly trained police driver reassures me he knows what he’s doing behind the wheel. As for the car, a fresh from the factory MG3 with 1.5-litre petrol and manual five-speed gearbox awaits.

IAM RoadSmart provides dedicated fixed-fee eco driver training for £40 per driver, thanks to current government subsidies and up to five drivers per day. On average, drivers achieve a 12% mpg improvement on the day, and 6.2% long term.

Behind the wheel of the MG3 for the first time, we’re given a briefing and we set off. Naturally, no two runs will be the same, but the route is a variety of urban and country driving, with a small portion of dual carriageway. Our fuel consumption averages are 38.5 and 46mpg, while average speed was 24mph and 25mph respectively.

While one of us clearly has some room for improvement, the aim of driver training isn’t to castigate bad driving practices but instead to improve them. We’re given pointers, such as to use block changing rather than sequentially going up and down each gear. And, when up to speed or slowing for traffic ahead, keeping in gear but backing off the throttle is more efficient. “There’s no point hurrying to wait,” says Richard. The advice is fairly obvious, but uneconomical habits can quickly creep in, with my colleague admitting to switching into neutral early when slowing to a halt – effectively idling the engine, which therefore requires fuel to keep it in that state, rather than using the fuel cut off if it had still been in gear. The big lesson is in observation, however, as this is the single most important aspect of driving. You’re not just driving your car, but anticipating others on the road as well.

Keen to impress and applying our individual feedback, the determination to improve fuel economy was strong. Naturally, the temptation is to drive slower but in practice that’s not necessarily possible. Block changing gears is an acquired skill and is best practiced in a vehicle already known to the driver but it clearly saves fuel as the results below demonstrate. In both cases, before hearing the results we felt our second runs would be worse than the first and slower too, as traffic was heavier. We were wrong.

Without ever mentioning the word safety, eco driver training will improve safety and consequently save fleets. This isn’t about re-learning how to drive either, or driving unsafely in the name of fuel economy. It’s instead about learning new techniques, changing bad habits and ultimately making considerable long term savings.

Figures wise, this calculates to some significant savings. At 12,000 miles per year our figures equate to fuel savings of between £140 and £230 when compared to our first drive results.

Clearly, driving faster doesn’t save time, it’s driving more carefully that does and it’ll save your fleet money too.