London Mayor Sadiq Khan has launched the second phase of his air quality consultation, which sets out detailed proposals for the early introduction of the Ultra-Low Emission Zone and its expansion, as well as proposals for an emissions surcharge on older vehicles. 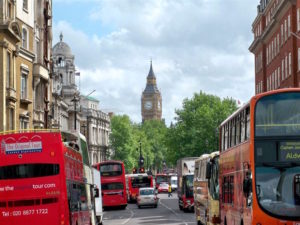 It is estimated that the equivalent of 9,400 premature deaths occur each year in London due to illnesses caused by long-term exposure to air pollution

Following on from the initial consultation last summer – which saw 79% of Londoners support plans to bring the ULEZ forward – the latest round gives Londoners’ the opportunity to have their say on the preferred date for the start of an expanded Ultra Low Emission Zone – which is up to the North South circular for cars, motorcycles and vans, and in central London for buses, coaches and lorries. Options include as early as 2019 to 2021 or later. Depending on feedback the Mayor will ask TfL to develop these potential options into detailed statutory proposals for consultation next year.

Views are also sought on proposals to introduce an Emissions Surcharge for older polluting vehicles entering the Congestion Charge zone in October 2017. The ‘T-charge’ would be in addition to the Congestion Charge, would operate during the same times and would levy a fee of £10 per day for vehicles that do not meet the Euro 4 emissions standard for NOx and PM emissions.

The Mayor has also called on Government to put in place a national diesel scrappage scheme to help people replace vehicles affected by the proposals.

Alex Williams, TfL’s managing director of planning, said: “The Mayor has asked us to set out in detail and seek views on a range of proposals that will have a significant impact in reducing pollution in the capital.  We think these ambitious proposals show London is taking the lead globally in tackling one of the biggest challenges of the 21st century.  I would urge as many people as possible to respond to the consultation to help us shape our plans.”

The consultation is open until 18 December for customers, stakeholders and residents. For more details, visit www.tfl.gov.uk/airquality-consultation

A further final consultation will take place in early 2017, which will take into account the views from this consultation and propose statutory changes to the ULEZ.