Roads Minister Jesse Norman has announced the preferred corridor for the Oxford to Cambridge Expressway. 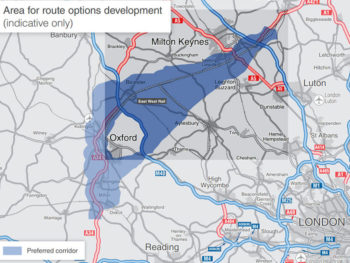 Map of the Oxford-Cambridge preferred corridor

Due to open in 2030, the expressway is projected to take up to 40 minutes off the journey between the A34 south of Oxford and the M1.

Following consultation and review, the Government has accepted the recommendation of Highways England on option B, which runs alongside the planned route of East West Rail.

A specific route will now be designed, including further consultation with local people to find the best available options, and a full public consultation is due next year.