All-Lane Running schemes have been rolled out in the UK with “a shocking degree of carelessness” and without taking necessary steps to ensure the safety of motorists and recovery operators. 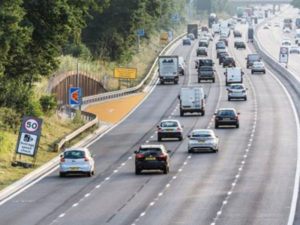 The report says there should be no more than 800m between emergency refuge areas; currently they’re up to 1.6 miles apart

That’s the finding of the All-Party Parliamentary Group (APPG) for Roadside Rescue And Recovery in a new report that says the future roll-out of such motorways should be halted until there is at least three years of safety data for each existing stretch of all lane running that shows an average improvement in safety on each scheme compared to a traditional motorway and a marked reduction in the rates of live lane breakdown; one of a number of recommendations that they make.

The report has been published as a Freedom of Information request from the BBC Panorama programme has found that 38 people have been killed on smart motorways in the last five years.

The Panorama programme, which aired last night as a review commissioned by Transport Secretary Grant Shapps into such schemes continues, revealed that on one section of the M25, outside London, the number of near misses had risen 20-fold since the hard shoulder was removed in April 2014; from 72 in the five years before the road was converted, to 1,485 in the five years after.

According to the APPG report now available, All-Lane Running Motorways have a current live lane breakdown rate of 38% – compared to 20.43% on traditional motorways – a figure that it says is completely unacceptable.

It adds that the fact that a system is being rolled-out across the country that nearly doubles the frequency of such incidents is a “public policy failure”.

The report also refers to Transport Committee data from M25 evaluations showing a shocking degree of non-compliance – given as 8% – with Red X signals; putting not only motorists at risk, but also vehicle recovery operators, emergency services and traffic officers.

As well as recommending that the roll-out of All Lane Running motorways should be halted until there is more safety data, MPs also say they should be stopped until the live lane breakdown rate is at or below the 20.43% figure calculated for traditional motorways.

They also say all existing stretches of All Lane Running motorway should be retrofitted fitted with Stopped Vehicle Detection systems. AA analysis published last year of a Highways England document shows it takes Highways England more than 17 minutes to spot a broken-down vehicle in a live lane on an All-Lane Running motorway when Stationary Vehicle Detection (SVD) systems are not in place.

The APPG adds that many of theese measures should have been in place before the roll-out of these roads commenced – not only would these have cost the taxpayer less if used at the outset but, more importantly, they would have saved lives.

The report has been welcomed by the RAC – one of a number of motoring and road safety organisations to have expressed serious concerns over smart motorways since their roll-out.

RAC head of roads policy Nicholas Lyes said: “This report shines a light on the huge concerns that exist about the safety of All Lane Running smart motorways in the event of a breakdown. With more than two-thirds of drivers telling the RAC that the permanent removal of the hard shoulder compromises safety in the event of a breakdown, it is now abundantly clear things need to change. We also know that breaking down in a live lane carries a much higher risk than in a comparative place of safety such as a hard shoulder or an SOS area.

“We have consistently called for the roll-out of stopped vehicle detection radar technology to quickly identify stranded vehicles and additional SOS areas to give drivers a greater chance of reaching one in the event of an emergency, thereby reducing the collision risk. Alongside this, enforcement of lanes closed with red X signs and a smart motorway public information campaign will help improve safety.

“Increasing capacity on our major roads is important, however it is vital that everything is done to reduce the risk to drivers who break down on smart motorways.”