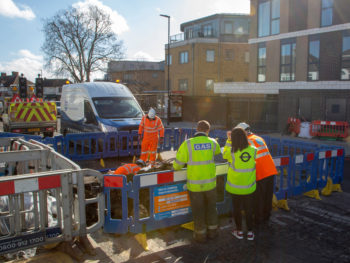 Separate £2.7m DfT funding will be used to improve road conditions at 30 locations across the capital

Introduced in London in 2012 – and being rolled out nationally this year – the scheme charges utilities companies up to £2,500 for carrying out roadworks during daytime hours. This incentivises utilities to switch to quieter roads and to avoid peak times as well as collaborating on works; according to TfL since the launch of the scheme, there has been a 65% increase in companies working at the same site, at the same time, and a 30% rise in planned utility works at night

As a result of the scheme, TfL has invested £6.1m in London’s road network in the past year, including £350,000 awarded to innovation challenge RoadLab which aims to develop products that make roadworks safer and smarter. Solutions being developed include a smart roadwork barrier that can detect when it has been moved and the use of artificial intelligence to scan social media and gain real-time insights into potential disruption on the road network.

Funding has also been used to develop CISBOT, a robot capable of fixing joints in large cast iron gas pipes. The robot can work in a live gas main without disrupting the gas supply to nearby properties and significantly reduces the amount of road closures required. The robot is set to be used in upcoming gas work at Clapham Common North Side, where it could help to save up to 33 weeks of disruption on local roads.

Other solutions being funded include updates to traffic signals to reduce congestion and improved mapping of the capital’s roads, which will help to reduce the possibility of larger vehicles using unsuitable routes and causing disruption.

Previous: First Drive: Toyota Camry
Next: Survey finds 66% to choose AFVs over diesel as their next car