Following extensive research and trial, Highways England has given the green light for the speed limit around road works to be 60mph, up from the previous limit of 50mph. 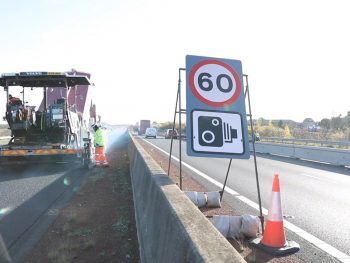 60mph was found to be safer than 50mph at motorway road work sites, while also retaining more compliance and reducing journey times

The research found that travelling at 60mph was safer than 50mph, due to motorists being more compliant with the law at that speed.

Jim O’Sullivan, Highways England chief executive, said, “All of our research shows that road users benefit from 60mph limits in roadworks. They have shorter journey times and feel safe.

“Road users understand that roadworks are necessary, but they are frustrated by them. So testing 60mph has been about challenging the norm while ensuring the safety of our people working out there and those using our roads.

“We have a huge programme of work planned, so being able to use 60mph where safe will continue to improve everybody’s experience of our roads.

Anthony Smith, chief executive of the independent watchdog Transport Focus, welcomed the change. He added: “We know road users want speed limits in roadworks to be no lower than necessary to maintain safety – so 60mph in roadworks wherever it is safe to do it is a welcome step.”

Some road projects, which trialled the 60mph during an eight or 10-week period over the last 18 months, were confident with how the increased speed limit was operating so rolled it out further within the roadworks or kept it on until the work completed.