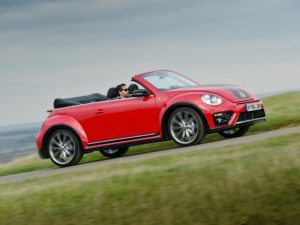 Back in 2011, Volkswagen launched this generation of Beetle with plans to inject a little sportiness into its fashionable two-door. Perhaps a sign of changing times, as consumers move towards SUVs and affordable hot hatches, in the six years since it’s become the only coupe and cabriolet Volkswagen makes.

That’s quite a change of image for what was once the People’s Car. Some 330,000 owners of the original Beetle opted for the soft-top between 1949 and 1980, choosing wind-in-the-hair motoring and the accompanying clatter of air-cooled engine on summer drives. As the UK is – in typical British character – a large-scale consumer of cabriolets, despite our unsuitable climate, pairing retro chic with al-fresco motoring is still a niche worth filling. 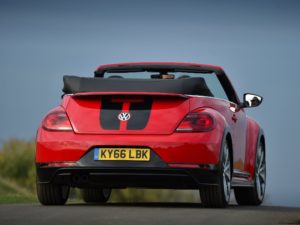 In R-Line spec, it’s not a car for shrinking violets. The sportiest member of the range, introduced during 2016’s mild refresh, gets some hints of Golf GTI in its large front air intakes, bodykit, dashtop gauges and 18-inch polished wheels. But not the power to match. Volkswagen offers a single engine option; the 148bhp 2.0-litre TDI, with either a six-speed manual or DSG automatic, the latter adding £1,360 to the list price and nudging Benefit-in-Kind up a couple of bands due to higher CO2.

It’s a car that you’ll either love or hate; not short on impact, especially in primary colours, and with options including 20-inch wheels and bonnet stripes for those who really want to be noticed. As an upshot, the familiar 2.0-litre diesel is as quiet and smooth as it is in every other Volkswagen Group car, even with the roof down, and delivers enough mid-range pulling power to raise a smile. 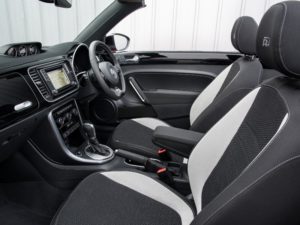 The downside, as was the case with the original Beetle later in its life, is it’s showing its age. Partly because this is still based on the Golf which was discontinued in 2012; not a reason to dismiss it altogether, but it lacks the ride and handling finesse of newer Volkswagen Group vehicles in this size bracket, and the interior trim and instruments feel a generation behind too. While it’s unlikely to dissuade someone who wants a Beetle, premium drop-tops feel more modern and aren’t significantly higher priced.

Even so, it’s a decent cabriolet. The R-Line’s bucket seats are excellent, there’s space for two in the back, and very little wind noise through the acoustic hood. If the weather changes, open-top driving is available in around ten seconds at up to 30mph, and while boot space isn’t a priority here, it’s quite spacious once you get items through the letterbox opening. All it’s missing is the wind deflector, which is an essential option at £285.

The Beetle really is a sign of the times; a car descended from one of the most instantly recognisable silhouettes in automotive history, now competing in two increasingly niche segments. Still a bit too soft for potential Scirocco customers perhaps, but chic enough and practical enough to make an appealing user-chooser option.

Likely to appeal to perk drivers, Beetle’s biggest problem is a lack of engine options. It also makes more sense with the cheaper, more efficient, manual transmission than the DSG tested here.