New engines and a focus on aesthetics should give the Kadjar a boost, reckons Alex Grant. 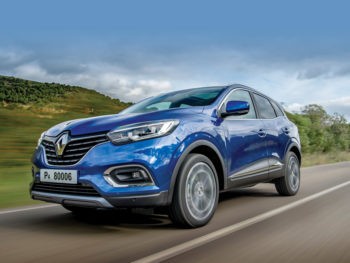 The Kadjar felt like a relative latecomer in the medium SUV segment, but it’s hit the ground running. From a standing start in 2015, its mix of Captur styling and Qashqai mechanicals (plus seemingly unending consumer demand for SUVs) helped it find more UK homes than the Mégane and Scénic combined in 2017, according to DfT data. Half went to fleets.

Competition has only got tougher since, and Renault is hoping this mid-life refresh will give new and existing users a reason to look again. New lights, some extra colour-coding and a focus on consistent satin silver accents inside don’t reinvent the wheel, but it’s made the Kadjar feel a little more premium than the outgoing car, which should help.

Sensibly, much of this has happened inside. Building on an already comfortable long-distance car, Renault has re-shaped the seats and added extendable thigh supports up front, while curing some niggles with the old car. There are deep cupholders in the centre console, slots for 1.5-litre bottles in the door pockets and twin USB ports in the back – albeit at the expense of some of the storage space under the front armrest. All of the Nissan switchgear has gone, too.

The UK range comprises four trim levels, spaced with £1,500 price gaps. Renault expects the mid-spec Iconic to be the most popular, as this is where navigation, all-round parking sensors, 19-inch alloy wheels and keyless entry and start become standard kit. However, it’s only top-spec GT-Line versions that get autonomous emergency braking, and even these don’t get adaptive cruise control – unlike the Mégane.

All versions include a seven-inch touchscreen with Android Auto and Apple CarPlay, now set behind a large, flat panel with flush controls for media and hands-free parking. Visually it’s much neater, but the software is ostensibly unchanged – intuitive, but laggy when changing between digital radio stations.

Diesel is still the preferred fuel for Kadjar customers, outselling petrol 2:1 despite the entire range falling into the same 27% Benefit-in-Kind band. Renault didn’t have the likely best-selling dCi 115 available to test, but it’s 5bhp more powerful than its already perky predecessor and has an overboost function for short bursts of acceleration, which bodes well. Both diesels include Selective Catalytic Reduction to minimise NOx emissions, but the Kadjar’s surprisingly capable four-wheel drive system is only available on the dCi 150.

The alternatives are worthy of note; 1.3-litre turbocharged petrols with 138bhp and 158bhp, developed with Daimler. Both offer a wide spread of pulling power, and there’s not much of a performance compromise for opting into the lower-powered unit. However, Renault has no plans to offer the ‘mild hybrid’ diesel from the Scénic or its forthcoming E-Tech petrol hybrid system in the Kadjar.

Granted, that’s no dealbreaker yet, but capitalising on an existing reputation for electric mobility and rising demand from customers feels like a missed opportunity to stand out from the ever-growing SUV crowd.

The Kadjar remains a great all-rounder, with generous equipment, space and a genuinely efficient diesel engine. But, in a crowded segment, it’s low on USPs.