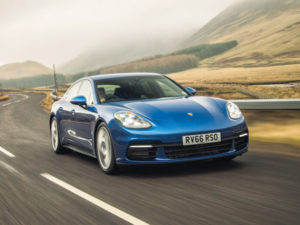 Though Porsche had toyed with launching a four-seat coupé back in the early 1960s, it took until 2010 for that idea to reach reality with the first Panamera. Part sports car, part luxury saloon, it was as divisive as it has been popular, often outselling the Boxster and Cayman globally, despite the lure of the fashionable, versatile Cayenne.

A little like the SUV line-up, Porsche started well but it took a generation to get the full concept right. The Panamera, now on an all-new platform developed in-house, is longer, wider and slightly taller than the original, but also much better proportioned with its slim 911-like rear lights, broad shoulders and raked roofline. This is a big car, at over five-metres from end to end, but it finally looks comfortable in its own metalwork, something the old one never really managed.

That evolution isn’t skin-deep. There are petrol, diesel and plug-in hybrid drivetrains to choose from, each with four-wheel drive and an eight-speed PDK gearbox. Diesel comes in a little higher up the range than it did before; a 416bhp 4.0-litre twin-turbocharged V8, where the old car had a 296bhp 3.0-litre V6, yet it’s no less efficient.

It ticks two diverse boxes very neatly. There’s barely any wind, road or engine noise at motorway speeds and, while it’s not as smooth-riding as most of its closest rivals, a focus on agility hasn’t compromised ride quality too heavily, at least with the optional air suspension fitted. Ticking over in eighth gear, and with the engine automatically decoupling itself at low loads, it’s easy to get between 40 and 45mpg on a long journey, which is staggeringly impressive.

But this takes willpower. With peak torque of 627lb/ft available from 1,000rpm, there’s an ever-present feeling that you’re sat on enormous performance reserves. In sport mode, with all eight cylinders firing, both turbochargers and that fantastic chassis underneath, it’s easy to forget that this is a two-tonne luxury saloon. If you’re seduced by the styling, then the driving experience won’t disappoint.

Neither will the cabin. It’s a generation ahead of its stablemates, with a wide 12.3-inch touchscreen home to most functions and the rest appearing out of a gloss black panel on startup. Rear-seat occupants get two individual, folding, sports seats to match the front, and boot capacity has increased 10% between generations.

It’s not perfect from a usability point of view, though. Porsche’s keyless start system requires twisting a key-like knob on the dashboard, which seems pointless if you’ve already got your keys out to open the doors, while drivers may also find the lack of side support on the front seats a bit disappointing. But, overall, it merges two diverse briefs very effectively.

Plus there are some additional reasons to take note; such as the Sport Turismo estate version, and the new 456bhp, 56g/km plug-in hybrid, which could lure customers out of Tesla showrooms. While it’s taken a generation to fine tune, the Panamera has finally got that long-considered luxury coupé concept just right.

Better looking, better to drive, and more usable, the Panamera has matured into a great all-rounder for those lucky enough to choose one.