By Martyn Collins / 2 years ago / Road Tests / No Comments

Not the biggest estate, but Martyn Collins thinks the Peugeot 508 SW looks great and is surprisingly practical. 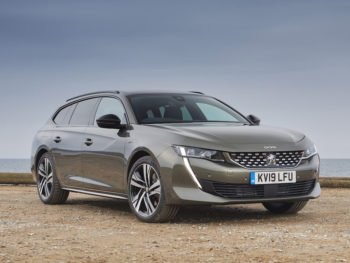 Finally, after what seems like forever, but has actually been six months, the SW estate version of Peugeot’s sharp-suited 508 is finally available in the UK.

With its low, coupe-like roofline, the 508 SW looks more shooting brake than proper estate, but this 508 still boasts a 530-litre boot – 43 more than the Fastback hatch. This might not be class-leading, but it’s still very practical. Drop the rear seats flat via the ‘Magic Flat’ feature, and this space increases to a very useable 1,780 litres.

Elsewhere, space in the front of the 508 SW is fine, although it takes a while to find the most comfortable driving position with the i-Cockpit cabin. Space in the back is only average too.

On the road, despite the extra length, it doesn’t feel too different to the Fastback. However, after trying other 508 SW versions, this 1.5-litre HDi 130 version on 18-inch wheels rode best in our opinion – even with the three-mode adaptive suspension. Peugeot is now predicting a 70:30 split between diesel and petrol models in the UK, with diesel choice split equally between BlueHDi 130 and 160 engines. And the BlueHDi 130 we tested was refined and composed – even down to the performance! However, this can frustrate, especially when setting off from standstill.

The steering is light, but there is a good amount of feel at speed. It is less precise at speed and the small steering wheel doesn’t help, as its small size can make manoeuvres difficult. Overall, the 508 is a confident handler, but doesn’t feel that sporty.