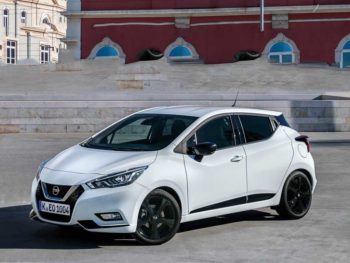 Change is afoot for the Micra. Sales are up by a fifth across Europe in the two years since it grew into a rakish, youthful supermini, and it’s become well-placed to bridge the gap left by the now-discontinued Pulsar. But, given that this evolution was drastic enough to perhaps warrant a new name, is the world really ready for a performance version?

The Micra N-Sport faces formidable warm-hatch adversaries in the Ibiza FR and Fiesta ST-Line, and it’s cut from a similar cloth. It features large wheels, black Alcantara and artificial leather seats, and equipment including a rear-view camera, keyless entry and NissanConnect with Android Auto and Apple CarPlay. Proper sports bucket seats feel like the only glaring omission.

Nissan is offering two new 1.0-litre, three-cylinder turbocharged petrol engines, and it’s the more powerful version which offers the keenest drive, helped by a drop in ride height. This is a derivative of the Qashqai’s new 1.3-litre unit, but with a cylinder missing, and produces 117bhp with an overboost function to sharpen short bursts of acceleration. This makes for a spirited, if not overly involving, driver’s car, but impresses most for its refinement – it’s exceptionally quiet and smooth for a three-cylinder.

The 100bhp version is based on the old 0.9-litre, 90bhp engine and available with a five-speed manual or stepped continuously-variable transmission – something Nissan expects to become increasingly popular. It lacks the 117bhp engine’s sixth gear and low suspension, but the driving experience is so close that the extra power feels unnecessary. Both engines are also offered in other trims, for those who want to tone down on the aggressive styling.

Either way, it’s a competent supermini if relatively pricey versus rivals. With that in mind, Nissan’s biggest issue might well be making its target market aspire to the ‘Micra’ badge.

Previous: Mytaxi ride-hailing app rebrands under BMW and Daimler JV
Next: A state of emergency: How the UK should tackle transport emissions