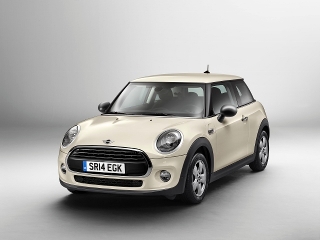 Of all the myriad trim levels and option packs available for the new MINI, it’s the basic One version that fits closest to the design brief set out by the British Motor Corporation in the 1950s.

While the original Mini offered a sophisticated alternative to the bubble cars of the time, this latest version is targeting a very capable, competitive supermini class. Although it has got larger, in three-door form it’s still smaller than most of its rivals.

The first to be developed entirely under the BMW Group, and up against the Audi A1, there’s a sense that no corners have been cut here. Its doors shut with a solid thunk, cabin materials and switchgear wouldn’t feel out of place in an executive saloon and even the monochrome displays in the One are high definition. The MINI exudes quality that nothing else in this sector can match.

Although changes to the design are predictably conservative, as it’s a proven formula for big sales, a few MINI hallmarks have been abandoned to make this feel more user-friendly. The electric window switches are now on the doors, while the speedometer, rev counter and fuel gauge are on the steering column like a normal car. There’s also a large toggle switch, with a pulsing red heartbeat glow, to turn the engine on.

MINI has retained the central instrument cluster but, as a sign of the technology creeping into this class, it’s set aside for navigation and media screens. That’s not something fitted to the One, which has a simple media display, but this does get a ring of colour-changing LEDs which match the cabin’s ambient lighting, or show climate control settings as you adjust them. As much as it sounds like a novelty, it’s very useful while driving.

Like the Cooper D, the One D uses the BMW Group’s new 1.5-litre, three-cylinder diesel engine, detuned here to 95bhp – a figure that’s closer to C-segment norms for an entry-level car. It’s a delight to use, with smooth power delivery, class-above refinement and fuel economy which easily settles in the mid-60s on motorway runs.

Ride quality and steering weight are towards the sportier end of this segment, which is to be expected, but there are few cars in this class which are as much fun to drive on minor roads, yet feel this refined and relaxed at higher speeds.

Perhaps that’s to be expected at this price level, though. Even up against superminis with equivalent power outputs and factoring in the whole-life cost advantages of its bulletproof residual values and tiny thirst for diesel, this is a premium option even before considering the extensive options list.

However, with the option of five doors, the One D makes not only a very convincing alternative to a the big-selling Cooper D trim, but it’s worthy of consideration for drivers moving out of a C-segment car too, provided they don’t need the boot space. Just like the original, this has broad appeal.

Beautifully built, effortlessly efficient and as suited to fun drives as it is to longer journeys, the One D might just make you question whether it’s worth sizing up to a Cooper.