By Julian Kirk / 9 months ago / Road Tests / No Comments

With a Benefit-in-Kind figure akin to its diesel sibling, the Mercedes-Benz CLS 450 4Matic AMG Line could be more relevant for corporate drivers than you’d think, says Julian Kirk. 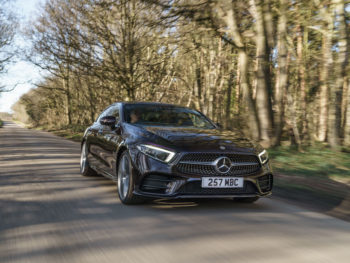 There’s something quite decadent in flooring the accelerator of a creamy smooth large-capacity petrol engine and letting it sing to the red line. After all, we live in parsimonious times and we really shouldn’t be having fun on the road, should we?

Yet there are still many among us to whom a company car (or a funded one) is not just a joyless means of transportation. Some of us still appreciate cars and engineering and performance and style… which, funnily enough, brings me to the new Mercedes-Benz CLS.

This range created and defined the ‘coupé-saloon’ sector, bringing rakish styling over more mundane executive sector mechanicals. This new version continues in this form, a sharp new set of clothes wrapped around the worthy E-Class’s internals.

The subject of this test would have been, until very recently, anathema to fleets – an expensive niche car powered by a big, thirsty petrol engine. But times have changed and a shift in the perceived benefits of diesel and some taxation shenanigans by the Government have made petrol power fashionable again.

And it’s not just on the road where this petrol CLS impresses (which it does thanks to its in-line 3.0-litre six-cylinder engine allied to a mild hybrid EQ system – the same one Lewis uses on his F1 car). Amazingly, this car falls into the same Benefit-in-Kind tax banding as the more conventional 350 diesel version. And because their prices are separated by just a few hundred pounds, that means the difference in company car tax amounts to less than 20 quid a month.

Obviously, if you’re doing high mileages then the 350d’s near-50mpg average economy is much more reasonable than the 450’s 36mpg, but for those who do minimal business mileage, then the 450 really is the one to go for.

What we think: A creamy smooth big petrol engine is a novelty in the corporate sector, but this unit’s hybrid technology makes it very relevant.