By Craig Thomas / 11 months ago / Hidden / No Comments 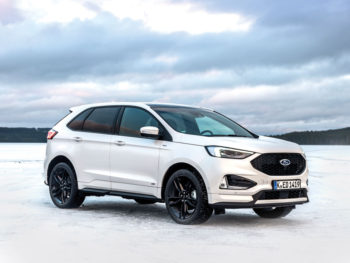 After four years on sale in the UK, Ford has refreshed its large American-sourced Edge SUV in an attempt to maintain sales and relevancy.

Standard for a mid-life revision is a tweaking of the design, with a new grille that is now even wider than previously, accompanied by a new bonnet, bumpers, tailgate and all the lighting units (headlights, rear lights and daytime running lights). The net result of all of these changes is to make the Edge look even more imposing than it already did.

Another sign of a refresh these days is an upgrade to the infotainment and connectivity equipment. In the Edge’s case, that means a debut for FordPass Connect modem technology, which adds a wi-fi hotspot for up to 10 devices, plus live traffic updates and a series of other features (vehicle locator, remote access and start functions, etc).

The main story of this upgrade, though, is the all-new 2.0 EcoBlue diesel engine, available in two forms.

The entry-level version, fitted to Titanium-trim cars with front-wheel drive, produces 150hp, so it’s not quick by any measure. Depending on wheel size and levels of equipment, official fuel economy is 38.2 to 42.4mpg*, while CO2 emissions are 153g/km**, which are respectable, without being truly outstanding.

The alternative, fitted to all-wheel-drive variants of the Edge has an increased output of 238hp, giving it a blunter performance. It feels responsive and refined, though, with two turbochargers ensuring that the power delivery is steady from low revs. It also feels relatively quiet, so it should prove a useful motorway cruiser. Economy, compared to the 150hp version, almost inevitably suffers, with fuel consumption dropping to between 34.4 and 41.5mpg, while CO2 emissions rise to 176g/km.

The overall impression of the Edge is one of rather unexciting competence, with little to make it stand out against the likes of the Skoda Kodiaq, let alone more premium offerings such as the Mercedes-Benz GLE.