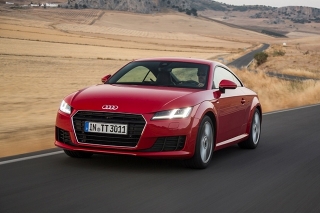 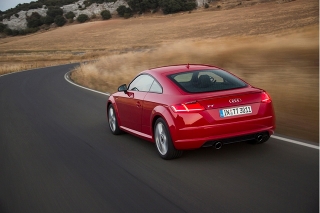 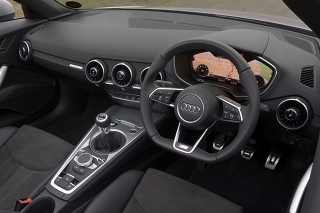 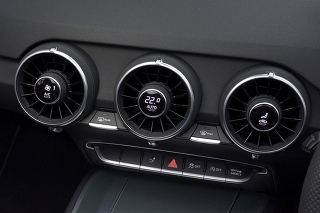 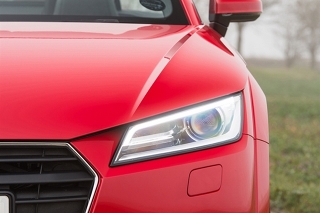 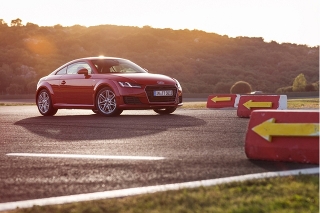 The Audi TT has evolved a little like an iPhone. Every few years, the coupe gets replaced with an all-new car that somehow manages to look cutting edge despite never straying far from the original design. And, like the smartphone, that latest iteration is always very desirable.

As with previous generations, the new TT’s platform is shared with the A3, which means it now benefits from the Volkswagen Group’s new modular setup. In turn it’s meant this is lighter than its predecessor – and feels it on the road – and can offer improved fuel economy too.

It’s evolutionary in design, though. Its distinctive silhouette has hardly changed since the first-generation car, yet slimmer headlamps and sharper bodylines make it look as futuristic as previous TTs always tend to at launch. It’s one of those shapes which, even without its badges, couldn’t be anything else.

The cabin is where Audi has really raised the bar. It’s a masterpiece of minimalism which feels as cutting edge as the original TT did back in 1998. Heater controls are slimmed down to knobs on the central air vents and infotainment and navigation functions are crammed into the all-digital instrument display. There’s nothing else like it, even at multiples of the TT’s price.

This is an easy thing to get wrong, and trading functionality for aesthetics quickly frustrates drivers. But with a rotary commander on the centre console and a tangible effort to make its myriad menus as logically organised as possible, the revolutionary cabin is very easy to get used to. It’s also beautifully finished, subtly accented with satin silver details and soft-touch plastics, and with an overall feeling of luxurious high quality.

It’s also never been more accessible to company car drivers. The TT is the latest car to join Audi’s line-up of ultra models, which means it’s optimised to use as little fuel as possible without shedding luxuries, blunting the driving experience or limiting buyers to tiny wheels and aerodynamic bodykits; as well as this Sport version, the TT ultra is available with the S line styling upgrades.

There’s no Quattro option for the diesel, but the engine – shared with the Golf GTD and Skoda Octavia vRS – doesn’t feel like a compromise. A wide power band, across which the TT delivers blisteringly aggressive responses to throttle inpits, belies what is beginning to sound like a modest overall output, and there’s almost no diesel clatter or heaviness up front. This might be the most efficient TT ever, but it’s not far off rivalling the petrol versions as a driver’s car.

Yet, in its most economical mode, it’s easy to see economy settling at around 60mpg. Boot space is surprisingly generous and, while it’s not as spacious as an A3, it’s no less comfortable over long distances. This is one of those unusual cars where performance genuinely doesn’t come at the expense of realistic day-to-day running costs.

Like the A3, Audi was ahead of the curve with the original TT, and it has continued to innovate with increasingly credible diesel versions since. The compact coupe was unmatched when it arrived in 1998, and this latest generation shows it’s still setting the standard.

The TT combines luxurious design and quality far above its price tag, but also now counts an impressive juxtaposition of performance and parsimony among its many talents. With the badge cachet to boot, there’s really nothing that can compete.