Transport for London (TfL) has acknowledged the need for urgent and continued safety improvements on London’s roads as it reports a 12% increase in deaths. 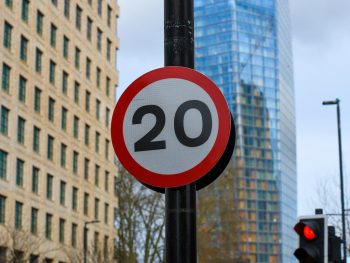 TfL is introducing a 20mph speed limit on over 20km of roads; part of work to cut down on increased speeding during the pandemic.

The newly published provisional figures for 2019 show 125 people were killed on London’s roads in 2019, up from 111 on the previous year.

The data also shows how vulnerable road users are particularly at risk. People walking, cycling and motorcycling made up 83% of all people killed or seriously injured last year in last year. A total of 68 people were killed while walking on London’s roads, up from 57 in 2018, and accounting for 54% of all fatalities. Of these, 44 were as a result of a collision with a car. Five people died while cycling, down from 12 in 2018, and 31 motorcyclists were killed, up from 22 in 2018.

Overall, 2019 shows a continuing decline in the number of people killed or seriously injured on London’s roads compared to the 2005-09 baseline, helping TfL towards its Vision Zero goal to eliminate all deaths and serious injuries from London’s roads. However, the rate of the decline has slowed in recent years, and TfL said the latest statistics underline why it is continuing to focus on making streets safer for those most at risk.

Urgent lifesaving measures include segregated cycle lanes, Low Traffic Neighbourhoods, the removal of lorry blind spots through the Direct Vision Standard, which has now been confirmed for enforcement from 1 March 2021, and improved motorcycle training.

TfL also said it’s introducing a 20mph speed limit on over 20km of roads; part of work to cut down on speeding. A Met police review of fatal collision investigations for 2019 showed that around half of these had speed as a contributing factor to the collision. And research indicates speeding has increased during the pandemic.

Work by TfL includes initiatives alongside the Metropolitan Police to urge drivers to look out for motorcyclists. TfL is also offering free online, face-to-face and socially distancing motorcycle and scooter training courses.

Lilli Matson, chief safety, health and environment officer at TfL, said: “Protecting everyone on the road – particularly people walking, cycling and motorcycling – is a priority for TfL, and the latest casualty statistics reveal why bringing in these strict new regulations is more important than ever. Introducing the Direct Vision Standard – the first standard in the world to reduce lethal blind spots from HGVs – combined with our wider work to reduce road danger will prevent more families, friends and communities from experiencing the devastation of road trauma.”