More than half (51%) of all drivers have hit or had a near-miss with animals on the road, equating to some 16 million drivers. 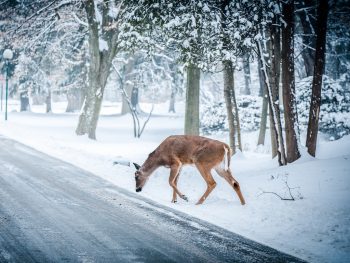 The research, commissioned by GoCompare Car Insurance, also revealed that more than two-thirds (68%) admit they wouldn’t know what to do if they hit a larger animal, such as a deer or a badger, while driving.

According to the analysis, the animals most likely to be involved in an incident with a car are:

While the animal running out into the road was the biggest reason for the incident (66%), driving at night was blamed by 22% of drivers. Driving too fast or being distracted contributed to 8% of the incidents.

The data also showed that animal-related accidents can happen at any time of day with broad daylight (32%) being the most common of the driving conditions, followed by evening/dusk (29%).

The research revealed impact that hitting an animal or having a near-miss can have on the driver and the car. When asked how they felt after hitting or nearly hitting an animal, only 16% of the drivers involved said they weren’t affected by the incident at all.

In terms of vehicle damage, 18% of drivers who hit an animal sustained damage to their vehicle, with 10% resulting in an insurance claim.

Lee Griffin, founder and CEO of GoCompare, commented: “Animals are unpredictable and as a result, these incidents are unexpected but are increasingly common, as we all spend more time in our cars.”

His comments follow AA Insurance research last year that showed the number of ‘hit wild animal’ claims had risen by 15% over a three-year period, with an average damage claim value of £2,300 and the possibility of write-offs in the case of hitting larger animals such as deer.

Griffin added: “The reality is that we all need to be more aware of the likelihood of meeting an animal of some kind on the road. Being mindful of our speed and the distractions around us will help reduce the risk of a serious accident if the worst does happen.”

It’s also worth noting that by law, you are required to tell the police if you’ve hit a dog, horse, cattle, sheep, pig or goat, although if you hit any animal, it’s best to report it to the police, particularly if it could be a pet, so that the owner can be informed.

The new sign has been developed for use in areas where accident rates are highest; according to the DfT 629 people were injured in accidents involving an animal in the road (excluding horses) in 2017 while four people were killed. It will also tackle the decline in wildlife numbers, in particular for hedgehogs whose population in rural areas has halved since 2000.