Škoda has expanded its Karoq and Kodiaq SUV line-ups with the addition of a new petrol unit; the result of continued growth in demand for petrol engines. 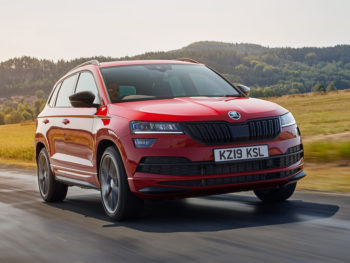 The new 190hp 2.0-litre TSI is available on the Karoq SportLine

The 190hp 2.0-litre TSI is available on Karoq SportLine models, married up with a seven-speed DSG gearbox and four-wheel drive and priced from £31,820. It brings 320Nm of torque while offering a 0-62mph time of 7.0 seconds, making it the fastest Karoq in the range. It also returns 32.1-33.2mpg on the WLTP combined cycle while emitting 158g/km of CO2.

In terms of performance, the 2.0 TSI 190hp Kodiaq brings a 0-62mph time of 7.7 seconds. Fuel consumption varies according to model, with the most frugal being the SE L model that returns 30.1-31.7mpg on the WLTP combined cycle along with CO2 emissions of 162g/km.

The 190 2.0-litre TSI Karoq and Kodiaq models are available to order now.