The new Renault Kangoo MPV and Vauxhall/Opel Mokka have returned four stars in the latest batch of Euro NCAP safety tests after falling short on dummy excursion and interaction in the lateral impact testing. 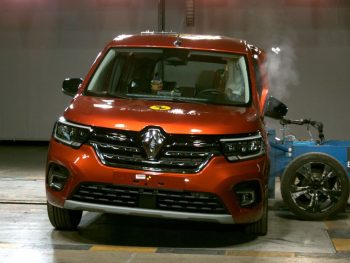 The Renault Kangoo and Vauxhall Mokka didn’t earn the maximum five-star rating, in part due to performance in lateral impact testing

Tested alongside three other carmakers’ models, the Renault and Vauxhall achieved strong results across all categories in impact and crash avoidance testing but didn’t earn the maximum five-star rating, in part due to performance in lateral impact testing.

Matthew Avery, director of research at Thatcham Research and Euro NCAP board member, explained: “The crash tests showed that the cars offered less protection than we have seen in other similar vehicles when impacted in ‘non struck side’ testing, which measures dummy excursion and interaction. The restraint and airbag systems in both vehicles failed to prevent excursion, or the extent to which the adult dummy moves to the opposite side of the car in an impact. Similarly, interaction was an issue, with neither vehicle having a countermeasure in place to prevent occupant-to-occupant injuries.

“Most vehicles tested in 2021 do have centrally mounted airbags to contain occupants, which could have helped the Kangoo and Mokka towards stronger ratings. That being said, emerging from our latest and most rigorous testing with four stars is still a good result.”

Mercedes’ GLA and electric EQA were also tested in the latest round of Euro NCAP tests and given five-star ratings based partly on the 2019 rating of the B-Class, on which the vehicles are largely based.

Finally, the Cupra Leon scored a 2020 five-star rating carried over from its twin, the SEAT Leon, while the recently launched VW Tiguan PHEV version, the eHybrid, has been added as a variant to the Tiguan’s 2016 five-star rating.

Previous: Fleet usage of contract hire to surge in next three years
Next: Renault Megane to go hybrid-only with arrival of hatch plug-in hybrid