Renault has unveiled an autonomous, electric robo-pod concept that it says could help transform the last-mile delivery sector. 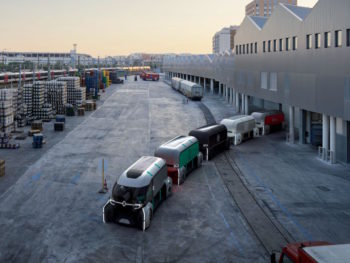 Unveiled at the Hannover Motor Show, the EZ-PRO concept uses a leader pod and separate robo-pods in a platoon concept. The pods would be used for deliveries by different businesses but work as a convoy to save costs.

Although the vehicles would be driverless, the concept still uses a field-based human ‘concierge’ who would sit in the leader pod and supervise the delivery of goods and services, including supervising fragile items, or even manually driving the leader pod if necessary. This sits in line with the manufacturer’s view that last-mile solutions will not go completely automated “as people will remain at the heart of transport activities for the foreseeable future”. End users would also be able to choose to receive parcels direct from self-service lockers in the pods, access via an app.

As well as cutting costs, the concept could help cut urban congestion – research carried out in France has found last-mile delivery makes up 30% of traffic in cities. Earlier this year, the Government outlined how electric cargo bikes, vans, quadricycles and micro vehicles could provide possible alternatives for last-mile delivery in UK towns and cities as part of its Last Mile call for evidence.