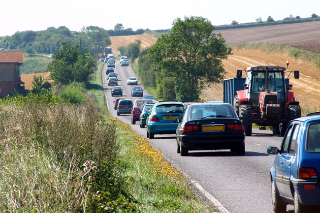 RAC Traffic Watch data shows a total of 16.8 million car journeys will be made over the Easter weekend as people make the most of the long weekend.

RAC spokesman Simon Williams said: “Easter traditionally sees the first big getaway of the year but this time we are expecting an unprecedented number of cars to be using major roads for leisure trips.

“Some years Maundy Thursday before the Easter weekend can be exceptionally busy but this year Good Friday is the day everyone seems to be planning to head off which is why we are warning people to expect it to be a long, mad ‘Bad’ Friday on the roads.”

Bank holiday Monday will see 3.6 million heavily packed cars to be heading for home. This means from Maundy Thursday to Bank Holiday Monday there will be over 20 million cars using the country’s major roads either heading to or returning from getaway breaks.

Simon Williams added: “The usual main road arteries will inevitably suffer the consequences of so many people trying to getaway for the double bank holiday weekend by car. The advice has to be to head off as early as possible to beat other travellers and to expect heavy traffic and jams on major routes.”