The RAC is introducing an updated version of its heavy duty patrol van in response to the growing number of vehicles needing assistance in harder-to-reach locations. 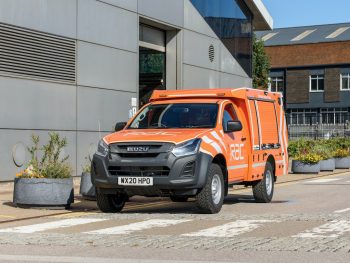 The current Isuzu D-Max Heavy Duty Patrol Van was revealed in April 2019 and introduced to bring an advanced recovery solution, in particular for the growing use of electric vehicles as well as SUVs and 4x4s.

Developed in partnership with Strongs, the new model features a lowered rear body, enabling vehicles to be recovered from more difficult-to-access locations such as car parks, shopping centres and airports.

As before, it’s fitted with the RAC’s All-Wheels-Up recovery system, which enables the patrol to lift all four wheels of broken-down vehicles, effectively bringing flatbed recovery capability.

RAC head of technical innovation James Gibson said: “This update to the successful customisation of the Isuzu D-Max which we first put into service last year means our patrols can now get to vehicles that are in harder-to-reach spots such as under-cover supermarket or airport car parks like those at Heathrow much more easily.

“The new vehicles, alongside our existing low-roof fleet, mean we’ll be the first breakdown company that can access almost any car park to complete a fix or, if needed, tow a vehicle to a garage. It’s a solution that saves drivers both time and hassle.”

The RAC is also ramping up the number of customised Isuzu D-Max patrol vans on its fleet; by the end of this year, it will have more than 100 on its fleet; double the number compared to the end of last year. It already uses the heavy duty vans for all RAC patrols covering London Heathrow and the roll-out will see more appearing in locations including Birmingham and Manchester.