By Martyn Collins / 3 years ago / Interview, Opinions / No Comments

Driver appeal isn’t dead: for Kia, it’s centre stage for the next generation of products. And Albert Biermann, the 30-year ex-BMW employee tasked with making that happen, says the benefits aren’t only for the end-users. By Martyn Collins. 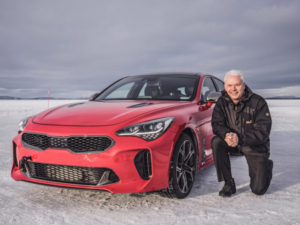 How does the Stinger – Kia’s first GT car – fit into the range?

The Stinger’s main mission is to compete against premium brands – we don’t tend to do this with our other Kia cars and the challenge for the Stinger was a lot higher. So we have put a lot of focus on the Stinger, but the basics are the same as other regular Kia cars.

Will the Stinger influence other products?

Yes, we’ve changed how we tune the electronic traction control system — not just for the Stinger, but cars like the Stonic too. We’re not just focused on stability, but also on carrying speed through corners. We’ve put a lot more effort in areas such as sporty driving.

My mission to my engineers is the car has to drive as it looks, and that can be quite challenging. I think we’ve done this very well with Stinger. You can expect more agile Kias, with more precise steering feel, that are more nimble – but at the same time fun to drive.

What handling characteristics do fleet buyers expect, and how could that change?

In general for Kia I think it’s ‘fun to drive’. Kia Motors Europe has a clear idea what the driving experience of a Kia should be, and ‘fun to drive’ has a strong part in that. We might need to compromise a little bit on driver comfort — not too much of course — but that fun to drive element has to be there.

We might get different customers in the future. Cars like the Stinger or the next Ceed will attract fleet customers who might not have looked at Kia cars before, but we can’t change too dramatically as our loyal customers are important to us.

As someone who clearly enjoys driving, how do you feel about autonomous cars? Is driver enjoyment still important?

I think at some point people will expect some level of aid in cars and appreciate the benefits of driving safety that come with it. So, in some areas, it will inevitably become standard and something you just have to have.

The fun to drive element will never die – I’m not worried about that. The last car on the planet Mr Porsche said will be a sports car and I strongly believe that.

Previous: Today in Fleet – Monday 23 July
Next: The Insider: No more ‘Treasure Island’