Plans for a traffic-free zone on London’s Oxford Street have drawn support from nearly two-thirds (64%) of respondents to an online consultation. 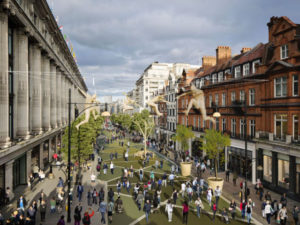 The plans would see the area between Orchard Street and Oxford Circus pedestrianised by December 2018 to coincide with the launch of Elizabeth east-west rail line services – previously known as Crossrail – which will significantly increase the number of people walking along Oxford Street.

The eight-week consultation on the plans ran from 6 November 2017 to 3 January 2018 and was open to local businesses, residents and visitors.

In a statement, TfL said it was working with Westminster City Council to consider all of the issues – including traffic and air quality on residential roads and provision of a safe cycle route through the wider area – before Westminster Council takes any further decision on how to proceed on the plans.

London Assembly member Tony Devenish said of the consultation findings: “The transformation of this important retail destination is vital if it is to compete against online retailers and other global venues, however, there are significant concerns that must be addressed as part of the plans. It is important that any changes take great consideration of the needs of the residents and businesses that occupy the surrounding areas. So far those concerns have not been fully addressed and I will be pushing TfL and the Mayor to ensure they are considered as the proposals move forward to the next stage.”

Previous: Met deploys hydrogen FCEVs on fleet
Next: Emissions and air pollution to be discussed at LowCVP Conference