UK car production fell 4.0% in October, with output now down in 16 out of the last 17 months as ongoing uncertainty over Brexit takes its toll. 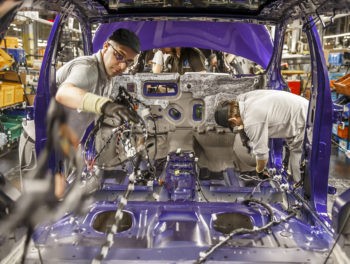 The figures from the Society of Motor Manufacturers and Traders (SMMT) – published just a day after it released latest data showing how a no-deal Brexit would “decimate” the UK car industry – show that 134,752 new cars rolled off production lines in October; some 5,622 fewer models than in October last year. Domestic demand was particularly hard hit, having seen a 10.7% drop in production, while exports fell 2.6%.

Year-to-date production is down 14.4% to 1,123,926 units, with the majority (80.5%) having been exported; providing further proof of the need for comprehensive trade deals.

While the only ray of light in the last 17 months has been August, which saw production rise 3.3%, the SMMT has warned that output was artificially boosted that month due to ‘no deal’ Brexit contingency shutdowns having been run earlier in the year, replacing the usual summer shutdowns.

Mike Hawes, SMMT chief executive, said: “Yet another month of falling car production makes these extremely worrying times for the sector. Our global competitiveness is under threat, and to safeguard it we need to work closely with the next government to ensure frictionless trade, free of tariffs, with regulatory alignment and continued access to talent in the future. This sector is export led, already shipping cars to more than 160 countries, and in a period of unprecedented change a close trading relationship with the EU and preferential trading with all these other markets will be essential to keep automotive in Britain.”

Alex Buttle, director of car selling comparison website Motorway.co.uk, also commented: “As such a key industry for UK manufacturing, a prolonged downturn in car production should be making headlines, and yet it barely registers amongst all the political noise.

“Despite this continuing gloom, it could get worse after the country goes to the polls in two weeks’ time.

“Caught between a rock and a hard place, while a no-deal Brexit is seen as catastrophic, a Brexit delay is seen as just as bad. But whatever the outcome, the domestic car industry is fed up and desperately needs to move on.”