By Natalie Middleton / 1 month ago / Innovation, Top Stories / No Comments

Featuring the same breathalyser tech as used by several UK, US and European police forces, the AlcoSense Ultra is put to the test by Fleet World. 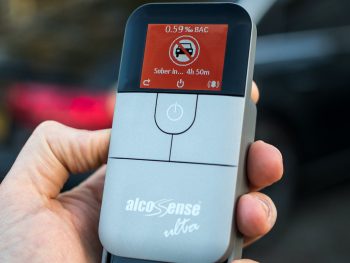 The Ultra Fuel Cell Breathalyser is AlcoSense’s top-end solution, aimed at professional and business drivers and with a large number of extra features

You know it’s the festive season when you’re asked to test a breathalyser – not least when the message about drink driving is still not getting home to drivers and has become even more of an issue due to the pandemic.

Last year saw over one in nine drivers fail or refuse a breath test when stopped over the Christmas period – more than 3,200 motorists out of a total of some 30,000 tests.

A recent report by the Royal College of Psychiatrists on the back of Public Health England data has revealed that the number of people drinking at high-risk levels has doubled to nearly 8.5 million since February – and it’s the middle classes where the problem is particularly acute, implicating company car drivers.

‘Morning-after’ drink driving remains a major risk among this; analysis by AlcoSense has found that almost one in five drink drive convictions are on the morning after and a third of all breath tests conducted by police after an accident are between 7am and 1pm.

Part of this is undoubtedly due to a lack of awareness of the time taken to sober up. Research carried out by AlcoSense last year found 44% of respondents would drive before 11am despite drinking five large glasses of wine or five pints of medium-strong beer the night before. Only one in six (17%) would wait until noon; about the time they are likely to be completely clear of these amounts of alcohol if they stopped drinking at 1am. Worryingly, a lot of drivers thought they could speed up the rate alcohol leaves their system – for example by a good night’s sleep or a strong black coffee.

Many drivers also don’t know the true size of pub measures and tend to overdo it here too.

It’s not just the risks of being caught for drink driving that are of major concern here, it’s also the risks of causing a potentially fatal collision. Information published by road safety charity Brake reveals that even when someone is only just over the legal limit they are still six times more likely to be involved in a fatal collision than someone who has drunk nothing. And even one alcoholic drink can impair your reaction times, judgement and motor skill – increasing the likelihood of an accident.

All of which builds a case for testing yourself at home before setting off in the car the morning after a few drinks.

One solution available on the market is the AlcoSense Ultra Fuel Cell Breathalyser. It’s the firm’s top-end device, aimed at professional and business drivers, priced at £249.99 and available from Halfords or www.alcosense.co.uk.

While the full range actually starts from £44.99, the top-spec product comes with a range of extra features particularly aimed at professional drivers. It uses exactly the same professional 200mm2 fuel cell alcohol sensor as several UK, US and European police breathalysers, has a professional grade sampling system – and gives advanced coaching on how to blow into it correctly, via a full-colour 1.8-inch screen.

It also gives clear traffic light coloured alerts, with detailed readings of your alcohol level in both blood and breath measurements.

And if you’re over your limit, it will not only tell you not to drive, it will even calculate how long it will take until you’re sober and set an alarm to re-test you again later.

There’s also many other advanced features to aid use and accuracy but too numerous to detail here.

Tested – as the device is intended – on mornings, and over a couple of weekends, we found it extremely easy to use and highly accurate but we were also surprised at just how high-tech and high-quality it was.

From the packaging, which makes it look like a premium tech gift such as a top-end mobile, to the device itself, it actually looks completely the job for a professional.

The breathalyser is a dinky compact unit that feels extremely robust and well put together, with a very clear display, automatic set-up to suit the country of location and instant display and response. Literally, all you need to do is set up the time and data – batteries are even included along with 100 blow tubes.

Actual use of it was also amazingly simple – including very clear guidance on how long and how hard to blow.

As I expected, I was completely fine to drive under the tests but the reassurance was very much welcome. And our other attempts to test the system indicated it was spot on every time.

What we also liked was the compact case for it, which meant you could easily keep it in a glove compartment to make sure it’s at hand before you get behind the wheel in the morning.

For anyone who thinks they could be at risk of morning-after drinking – and many people who don’t realise the risks – this could be a highly worthwhile investment.

Verdict: Looks highly premium, extremely easy to use and results seemed very accurate. Could be a licence saver or even a life saver.