Audi has announced details for its new A7 five-seat coupé, which brings a smarter, sleeker design and new technology. 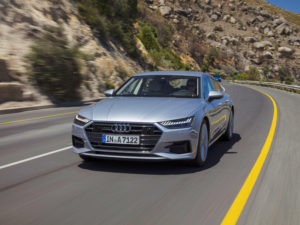 Available to order now priced from £54,940 OTR, the second-generation model incorporates the latest Audi design language as well as a larger cabin with more knee room and technology including a new MMI touch response operating concept and seen in the A8. Meanwhile new driver assistance features include a parking pilot and garage pilot, which will be introduced in stages from 2018.

Two trim levels will be offered – Sport and S line – and two engines classified according to the new Audi naming convention first introduced in the new A8 luxury saloon. The 55 TFSI is powered by a petrol V6 TFSI offering 335bhp and an official combined figure of 40.4mpg with official CO2 of 158g/km (on 19-inch wheels). A 50 TDI variant is also available, utilising a V6 TDI diesel that delivers 282bhp and 50.4mpg with 147g/km of CO2.

First deliveries are expected in April.

Previous: EU car registrations up 7.1% in January
Next: BP teams up with TomTom Telematics for fuel-saving fleet solution