Nissan has revealed initial pricing and grade details for its fifth-generation Micra ahead of order books opening later this month. 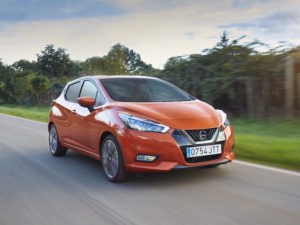 Unveiled at the Paris Motor Show, the new Micra brings increased space, downsized turbo drivetrains, a new chassis and latest safety features to the supermini segment, and will replace both its predecessor and the Note.

Five grade levels will be offered – Visia, Visia+, Acenta, N-Connecta and Tekna – with early pricing details released by Nissan showing that the range will be priced from £11,995, rising to the range-topping models.

Engine line-up from launch will cover a 0.9-litre turbocharged three-cylinder petrol engine and a 1.5-litre diesel, both with 89bhp.These will be joined soon after by a naturally aspirated 72bhp 1.0-litre petrol engine. No performance or efficiency figures have been released.

There will be 10 body colours to choose from and a range of exterior and interior personalisation packs including contrast-colour cabin and body features, leather trim, dynamic 17-inch alloys with colour detailing and body decals.

Full range pricing, as well as specifications and options for the new Micra, will be announced later this month when pre-orders open ahead of the model’s 2017 arrival.