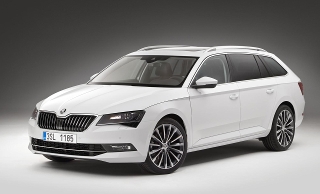 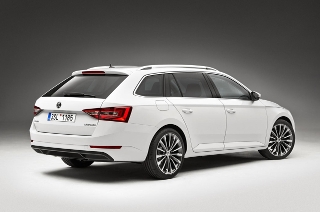 Scheduled to start first deliveries in September, the new model will be priced from £19,840 – £25 more than the outgoing model – and is said to bring a significant increase in standard equipment and technology across the range.

As announced last week, the estate is based on the group’s modular MQB technology and brings increased interior space. Boot capacity has also increased and now stands at 660 litres – up 27 litres compared to the previous model – rising to 1,950 litres with the rear seats folded.

Like the hatchback, the new Superb estate will be available with seven engine options and the option of DSG automatic and 4×4 transmissions on some models. The engine range consists of four TSI petrol and three TDI diesel units with outputs ranging from 118bhp for the 1.6 TDI to 276bhp for the range-topping new 2.0 TSI engine. Details of the GreenLine model will be announced at a later date.

New features introduced include a Virtual Pedal system that opens the boot with just the wave of a foot under the rear bumper and full integration of Apple and Android smartphones via SmartLink. Safety and convenience features include Blind Spot Detection, Rear traffic alert, third-generation Park Assist and Traffic Jam Assist.

The SE Business model adds features including Alcantara upholstery, front and rear parking sensors and sunset glass from the B-pillar back. Skoda’s Amundsen touchscreen satellite navigation system is also included as standard, with a 6.5-inch colour touchscreen. The SE Business is available with 1.6-litre TDI 118bhp or 2.0 TDI 147bhp engines, with a standard six-speed manual gearbox or optional DSG gearbox. It starts from a P11D price of £22,735 and 19% BiK.