Volkswagen has announced prices for its 2017 Golf, which brings updated styling as well as a new 1.5-litre turbocharged petrol and seven-speed DSG, and latest infotainment and assistance technologies. 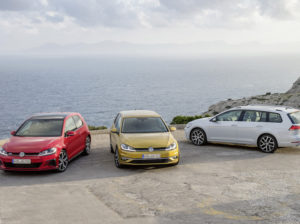 The new model retains the entry-level pricing of £17,625 OTR for the Golf S 1.0 TSI 85 PS three-door despite bringing extra kit including LED taillights. Overall, prices are on average £650 less than the corresponding outgoing models.

The estate family offers S, SE, SE Nav, GT and GTD and GTD BlueLine models and will be joined by Alltrack and R.

The initial line-up also includes the 181bhp 2.0-litre TDI in the Golf GTD and the 227bhp 2.-litre TSI in the GTI model. Meanwhile the range-topping Golf R also gets more power than ever before, now boasting a peak output of 306bhp from the 2.0 TSI unit, giving a 0 to 62mph time of 4.6 seconds.

Available later in the spring will be the entry-level 85bhp 1.0-litre TSI as well as a new 148bhp 1.5 TSI ‘Evo’ four-cylinder turbo with Active Cylinder Management offering official figures of 110g/km CO2 emissions and 57.6mpg on the combined cycle. This will be followed by a 128bhp BlueMotion version with 104g/km and 61.4mpg. Prices for these engines are still to be announced.

A new seven-speed DSG will be introduced, replacing the previous six-speed DSG and bringing improved efficiency.

All Golfs also feature BlueMotion Technologies such as a stop-start system and regenerative braking mode.

First deliveries for the 2017 Golf start towards the end of March.