Vauxhall has announced pricing and specifications for its revised Astra, which goes on sale this coming Thursday (1 August), bringing a completely RDE2-compliant engine line-up, as well as refreshed exterior design and new onboard tech. 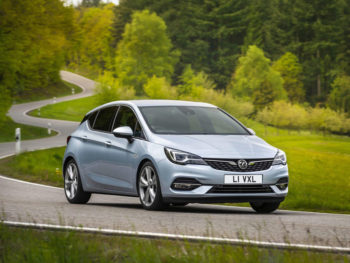 Previewed at the start of July, the updated range sees CO2 emissions and fuel consumption reduced by up to 19% compared to the outgoing model while all of the new engines are compliant with Euro 6d (6.3) and RDE2 – bringing VED and BiK benefits for diesels.

Diesel line-up comprises two variants of PSA’s 1.5-litre three-cylinder diesel engines with 105hp and 122hp, and married up with a six-speed manual gearbox while the higher-powered unit debuts PSA’s nine-speed automatic transmission as an option. NEDC Correlated emissions start from 95g/km for the 105hp variant.

Seven trim levels are offered and feature technology including the updated Multimedia Audio system, which features on the entry-level SE along with a seven-inch touchscreen, air con, cruise control and 16-inch alloys. The range also features Multimedia Navi and Multimedia Navi Pro systems, which are compatible with Apple CarPlay and Android Auto.

The range-topping Ultimate Nav trim is also equipped with a Bose premium sound system, wireless charging and technology such as the IntelliLux LED Matrix headlamp system.