The new Kodiaq SUV will be priced from £21,495 (OTR) when order books open next month, Skoda has revealed. 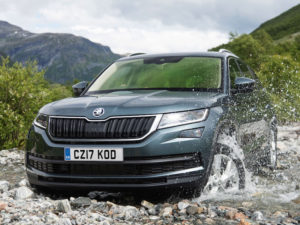 Starting first deliveries from April 2017, the Kodiaq will be available from launch in four trim levels, five engine options, two and four-wheel drive, and a choice of manual or DSG gearboxes as well as the option of seven seats.

Diesels cover two 2.0 TDI units with outputs of 148 and 187bhp units. The lower powered model version can be specified with a manual 4×4 transmission, two-wheel drive DSG and 4×4 DSG, while the 187bhp unit is fitted with a seven-speed DSG 4×4 transmission only.

The petrol line-up consists of two 1.4 TSI units, offering 123bhp plus a 148bhp unit with ACT (Active Cylinder Technology). The former is available in two-wheel drive manual form only, while the 148bhp version can be specified with a manual 4×4 transmission, two-wheel drive DSG and 4×4 DSG.

Trim levels cover the familiar S, SE and SE L designations along with a new Edition grade to mark the launch of the brand’s first ever seven-seater SUV.