The updated Škoda Superb hatch and estate is now available to order, bringing design and technology updates along with new engines, including a plug-in hybrid due 2020. 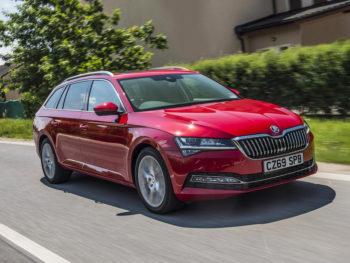 Four Superb engines will be offered from launch, with two further units to arrive this year and a PHEV version due 2020

Priced from £24,655, the 2019 Superb has been updated with a range of styling changes, including new bumpers and redesigned grille, full LED headlights with Matrix technology – a first for a Škoda production model, revised rear lights and updated alloys.

Engine line-up sees the addition of a 190hp 2.0-litre TSI but the biggest change is saved for next year when, as announced last month, the line-up gets a plug-in hybrid that marries up a 1.4 TSI petrol with an 85kW motor to give a combined 218hp along with official CO2 emissions below 40g/km, and an electric-only range of up to 34 miles thanks its 13kWh battery. Fuel efficiency is still to be announced.

While drivers will have to wait for the PHEV Superb, four engine options are offered from launch, covering a 120hp 1.6-litre TDI and 190hp 2.0-litre TDI diesels and the aforementioned 190hp 2.0-litre plus a range-topping 272hp 2.0 TSI version. Seven-speed DSG gearboxes and four-wheel-drive are available on selected models. CO2 starts from 110g/km (NEDC Correlated) for the 1.6-litre TDI hatch, rising to 161g/km for the Estate 2.0 TSI 272PS 4×4 DSG.

New technologies on offer include assistance systems such as Predictive Cruise Control. The Superb also features updated Blind Spot Detection, which now works at a distance of up to 70m.

Deliveries for the launch versions start from September.