Volkswagen has announced pricing, mpg and CO2 figures for the facelifted Passat, which brings a longer-range GTE hybrid model plus extra connectivity and safety kit. 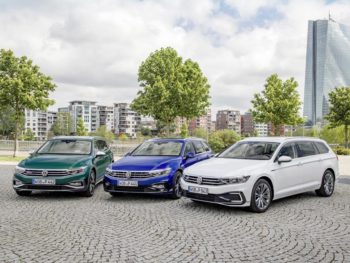 On sale now, the updated eighth-generation Passat saloon and estate (see first drive here) will initially be priced from £27,630 for the 120hp 1.6-litre TDI seven-speed DSG saloon in SE trim although an entry-level 150hp 1.5-litre TSI will open for orders in the coming weeks, available as both a six-speed manual or seven-speed DSG.

For now, two petrol engines are available to order – a 2.0-litre TSI four-cylinder in 190 and 272hp variants, both with seven-speed DSG, while the 272hp version gets all-wheel drive. Later this year, a 1.5-litre TSI EVO four-cylinder power plant with Active Cylinder Shutdown (known as EVO in VW speak) will be available. All petrol engines on the Passat will be fitted with particulate filters. CO2 starts from 143g/km for the 190hp 2.0-litre TSI with WLTP combined fuel of 36.2-37.2mpg.

The diesel line-up will also get a new 150hp extensively reworked 2.0-litre TDI EVO, which marks VW’s first use of Active Cylinder Shutdown on a diesel. This opens for orders in the coming weeks and will be available with either a six-speed manual or seven-speed DSG. CO2 has not been announced yet.

However, for both fleets and private buyers the return of the Passat GTE with an increased 34-mile electric range (WLTP) is expected to be of key interest – VW forecasts it will account for one in four Passat buyers. Full details and pricing for the GTE will be announced in coming weeks as orders open but it will be offered in two variants, including a standard GTE with kit including 17-inch alloys sports suspension, blue brake callipers, bespoke ‘C’ shape front LED running lights, Discover Navigation system with 8.0-inch colour screen and a charging point in the radiator grille. The GTE Advance model will build on this with 18-inch alloy wheels, IQ.Light LED matrix headlights, Discover Navigation Pro with 9.2inch colour screen and keyless entry with an easy-open boot.

For the rest of the range, trim levels have been pared back to cover SE, SEL and R-Line designations along with a limited-edition, estate-only R-Line Edition. Entry-level SE models get 17-inch alloy wheels and black roof rails on estate models, while a Composition Media System, incorporating a 6.5-inch colour touch-screen, DAB and Bluetooth comes as standard. All-LED headlights are now standard, including LED running lights plus LED rear lights.

The entire Passat range also offers enhanced connectivity, with wireless App Connect now fitted as standard, allowing the driver to seamlessly connect their smartphone to the Passat’s infotainment system via Apple CarPlay, Android Auto or MirrorLink via Bluetooth, without the need to plug the device in via a USB cable.

The facelifted Passat will also be the first Volkswagen to be fitted with Travel Assist – a system that allows the car to be driven at up to 130mph – where legal – in a partially automated mode. Featured as standard, it combines the latest version of Adaptive Cruise Control, version 3.0, which can now auto adjust the speed including temporary speed-limits as well as slowing for junctions and corners, plus Lane Assist version 2.0 which can now recognise kerbs and grass verges as well as road markings.

First UK deliveries of the revised Passat are expected to take place in late August.