The Polestar 1 plug-in hybrid coupé is now available to pre-order in 18 countries including the United Kingdom. 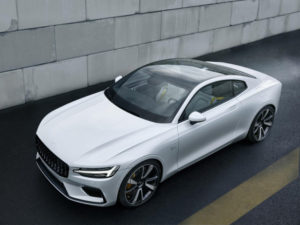 The first car from the new electric performance brand, the Polestar 1 is based on the same SPA platform as the S90, V90 and XC90, with a revised chassis and part carbon fibre bodywork. The rear axle features an electric motor at each wheel, producing a combined 216bhp and a battery-only range of 93 miles (150km) when fully charged, along with a 2.0-litre Volvo petrol engine at the front wheels, boosting output to 592bhp and 738lb.ft of torque and featuring four-wheel drive.

Customers can pre-order the car with a fully-refundable £2,219 (€2,500) deposit in the following markets: China, United States, Sweden, Germany, Norway, the Netherlands, Denmark, Finland, the United Kingdom, Spain, France, Portugal, Poland, Italy, Austria, Switzerland, Belgium and Canada. Limited volumes will be available and it will only be sold in left-hand drive.