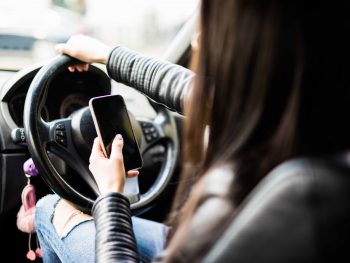 The campaign is meant to highlight the risks drivers face – and the risks they pose to others – when they use a mobile phone illegally while at the wheel, backed by the current penalty of a £200 fine with six penalty points, introduced in 2017.

Road safety and breakdown organisation GEM Motoring Assist said that although roads may be quieter during the current period of lockdown, the laws of the road remain in place for every road user’s protection.

Chief executive Neil Worth commented: “Holding and using any device while in control of a car is a potentially lethal distraction that is against the law.

“The physical task of keying in characters on your phone or scrolling through information is very risky while you are also at the wheel of a vehicle.

“It’s also mentally distracting, and if you allow yourself to take part in a conversation or try to read and respond to data on your phone, you’re dramatically reducing your ability to focus on safe driving.

“Please think about the consequences of picking up a phone. You wouldn’t do it with a police officer watching and you wouldn’t do it on your driving test. The risk doesn’t just disappear because the roads are quieter and there are fewer vehicles are on the road.

“If it’s tempting to reach for your phone while driving, then store it somewhere out of reach, and build in time on longer journeys to stop somewhere safe and check messages, calls and emails.

“Recognising these risks puts you in control and allows you to keep a 100% focus on the driving task and the journey.”