Road users can now submit footage of dangerous driving direct to a number of police forces in England with the help of a new portal. 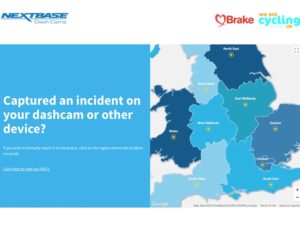 To submit a video, users can visit the portal and click through to the police force area where the incident occurred

Developed by Nextbase, the National Dash Cam Safety Portal builds on the successes of the Operation Snap campaign in Wales, which was launched initially by North Wales Police and rolled out across Wales in December.

The portal makes use of the growing take-up of dashcams – there are an estimated 2.6 million units now on UK roads – and brings a more streamlined approach to submitting footage. All 39 English forces currently use different means of accepting and logging video and processes can vary from submission via social media or correspondence by email to having to provide hard copies of video clips, even burning these to DVD and sending them via post in extreme cases.

The new portal enables motorists to safely and securely upload video footage directly to the right police force while also reducing the process time taken to just a few minutes.

West Mercia Police Superintendent Paul Moxley said: “While the benefits to motorists of this groundbreaking portal are clear, this convenience extends to police forces, since a process which previously took hours can now be reduced to a matter of minutes. In embracing this new technology, it enables the concerned road user to help us positively influence driver behaviour to make our roads a safer place for all users.”

The portal can be used for all footage and formats although users of the Nextbase Dash Cam have the added benefit of being able to upload to the portal directly via the manufacturer’s app.