Motorists are putting themselves and other road users at risk by hunting for Pokemon while driving, warns a road safety education organisation. 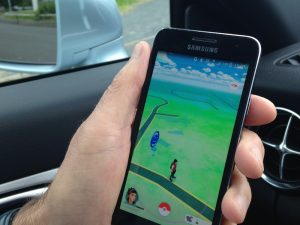 The TTC Group went on the trail after being alerted to incidents involving people in cars on ‘Pokemon Go’ hunts.

Within 30 seconds of driving out of the car park of their HQ in Telford, a mobile phone being held by a member of the TTC team in the passenger seat alerted them that the Charmander character was in a hedge around a corner.

“Our driver kept her eyes on the road but to our amazement another car being driven slowly with two men in the front were also playing the game, and told us they were hunting for the Pokemon characters,” said TTC Group director Alan Prosser, a national road safety advisor.

“We drove less than 100 metres before finding a motorist on the Pokemon hunt. My concern is there must be many, many more doing the same across the UK. It’s a dangerous game to play in the car as drivers will be driving deliberately slowly, stopping without warning, be distracted and not paying full attention to the road.

“You must give driving your full attention at all times,” he added.

There are reported to be 30 million people worldwide playing the mobile game. Over the past few days, a Pokemon Go player crashed his car straight into the back of a parked police car in Baltimore while looking at his phone for one of the animated screen characters portrayed amid actual surroundings.

The driver told police: “That’s what I get for playing this dumb game.”

In Sydney two 17-year-olds were fined $325 when caught by police driving dangerously at low speed near a pedestrian crossing playing Pokemon Go.

And in northern France a teenage driver crashed her car into the back of another vehicle while playing the game.

Previous: One in five people use their phone behind the wheel
Next: July marks end to four months of rising pump prices