MG Motor UK aiming for an eight-fold increase in fleet volumes over the next five years, underpinned by a range of SUVs, electric and plug-in hybrids, but with no plans to offer diesel engines. 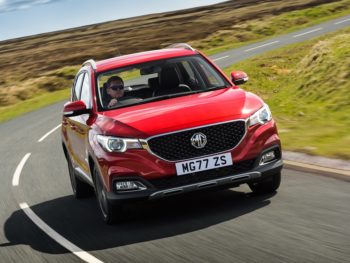 The MG ZS will be available as an electric vehicle next year.

Head of Sales & Marketing, Daniel Gregorious, said the company is aiming to double last year’s sales volumes during 2018, to 8,800 units, with ongoing ambitious to reach 25,400 units (a 1% market share) in 2022. Although the aim is to be more retail-weighted than the market average, he said the plan is for fleets to account for between 7,000 and 8,000 units by that point.

That upswing in sales is largely due to products. This year will be the first full 12 months for the ZS compact SUV, and the MG3 supermini is also being updated. The Qashqai-sized HS will follow in 2019 with a flagship SUV to follow in 2020, both getting plug-in hybrids around 12 months after launch, while an electric ZS is due next year. An electric MG roadster is due in 2021, which will be the brand’s first sports car since the last TFs were sold in 2011.

However, there are no plans to bring the new MG6 to Europe as yet, and Gregorious doesn’t see a role for diesel engines in the new range: “For us, the majority of our sales are in China which is all petrol, so the focus has to be on electric rather than a diesel for Europe. That’s the alternative for us. It’s not going into diesel and making that work, it’s going into electric – where the future is – and making that work for us, driving sales in the UK and European markets,” he said.

“It would be wrong to put a figure on it for the volume or percentage but [the share of plug-in vehicles] will be significant compared to the total mix of cars we sell.”

Expansion in fleet will also be underpinned by expansion of the dealer network. MG had 70 dealers as of the end of 2017, and the company is aiming to reach 120 by 2022. The aim is to add to, and grow, existing outlets, while also working with large groups that have an existing business centre infrastructure in place. Around 10% of the network will be business centres, for large fleet deals, with the remainder focusing on smaller, local fleets.

“The fleet business is important,” Gregorious added. “If we’re going to get to a 1% share, 25,000 units is hard to do just in retail, so we need to be in all the channels with good offers.”