Volkswagen’s eighth-generation Golf is now available in GTE plug-in hybrid guise; one of a number of new variants alongside a new 1.0-litre mild hybrid and the latest GTI. 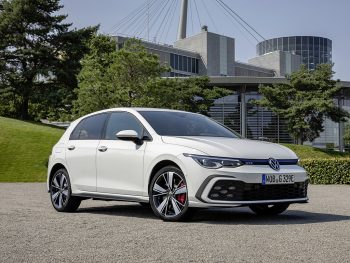 The 13kWh battery pack has an electric-only range of 32 miles. It comes with two cables, enabling it to be charged in around five hours at 2.3kW from the mains or around three hours 40 minutes using a 3.6kW wallbox/charge point.

It’s differentiated from the standard Golf models by blue detailing and GTE badging, and also gets honeycomb-design fog lights in the front bumper and IQ.Light LED matrix headlights as standard, along with 17-inch bespoke alloys.

The latest additions to the Golf range also include the new GTI. It returns in six-speed manual and seven-speed DSG versions, priced from £33,460 OTR and £34,960 respectively.

As with the GTE, it offers an output of 245hp and the 2.0-litre four-cylinder turbocharged petrol engine also delivers 370Nm. In DSG form, it reaches 62mph from a standstill in 6.2 seconds. Both models have a top speed of 155mph.

The final new version is the 110hp 1.0-litre eTSI. It’s offered exclusively on the Golf Life trim, and gets a mild hybrid system comprising a 48V lithium-ion battery and 48V belt starter generator.

It comes with official fuel economy of 54.3mpg and CO2 emissions of 118g/km, making it the most frugal petrol-only option in the Golf 8 range and the lowest-priced DSG-equipped option, at £25,190.