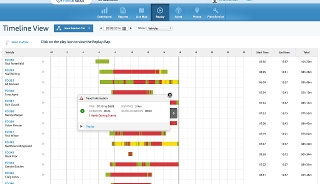 With 60 HGVs, 32 cars and four vans on the road six days a week, the family-owned food wholesaler needed to put into place new strategies to save fuel in line with its green credentials. With this in mind, the company recently decided to install Fleetmatics REVEAL.

By simply reducing idling and harsh driving, the company has seen a dramatic reduction in fuel usage, saving an estimated £38,000 in the first quarter.

Thanks to Fleetmatics REVEAL’s traffic light system, Mike Carter, transport manager at Philip Dennis, is now able to see on if vehicles are being left idling.

“As the drivers are being monitored their driving behaviour has improved dramatically and idling practices have decreased by 90%,” he said.

Using Fleetmatics REVEAL’s driving style summary and live alerts, the firm was also able to identify and tackle common harsh driving behaviours – including harsh braking, speeding and hard cornering. In less than year since Fleetmatics REVEAL was first introduced, driving style has improved dramatically, but the company has plans to enhance it even further.

“We are planning to put into place a driver league table across all three depots and the tables will be displayed so that everyone can see them,” said Mike Carter. “No one wants to be at the bottom of the league, so I’m confident that drivers will be encouraged to do better. We are also planning to give incentives to our top drivers while offering coaching to those at the bottom of the league.”

By reducing idling and harsh driving, Philip Dennis has been able to achieve significant fuel savings, while also improving its customer service. Thanks to the geofencing feature, Carter is now able to determine when each driver visited a customer and calculate an average of arrival times meaning that the company’s sales staff are now in a position to tell new potential customers at what time a vehicle visits a certain area.

“We are very happy with what we have been able to achieve thanks to Fleetmatics REVEAL,” he concluded. “Compared to other GPS tracking systems on the market it is very intuitive and it’s easy to use without any training.”