Peugeot’s 308 is being updated with fresh styling and a new 1.5-litre diesel engine. 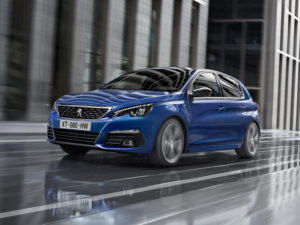 Available for delivery from September onwards, the updated range – which is available in hatch, GTi and SW models – gains an updated grille, new bumper and LED daytime running lights across all models while the interior gets a new 3D satnav system with voice control. Allure, GT Line and GT trims also benefit from the addition of a large glass roof as standard.

Engine line-up changes see the 308 become the first PSA Group model to get the new BlueHDi 130 S&S four-cylinder diesel engine, although fuel and CO2 figures are not available. Meanwhile an eight-speed automatic transmission debuts on the GT-exclusive BlueHDi 180 Stop&Start engine.

In addition, the three-cylinder petrol engine gets efficiency upgrades – again CO2 and fuel efficiency figures are not yet available – and a new six-speed manual gearbox.

Other changes include additional driver assistance tech in the form of Active Safety Brake and Active Lane Departure Warning and adaptive cruise control.

Prices and specification details will be announced this summer.